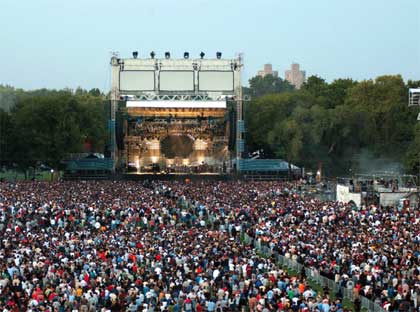 Hooray Brooklyn
The summertime free music options keep on rolling out. Not to be outdone by the recent Summerstage announcement or River to River's Wire kick-off, Brooklyn's answer to free in-park music stepped up this week to show what they've got. The Celebrate Brooklyn series runs all summer long at the Prospect Park Band Shell, and will kick off with a free Isaac Hayes show on June 12th. From there, they'll host a number of free (well, $3 recommended donation) shows, with everyone from Medeski Martin and Wood to Ghostland Observatory performing. Even if you're not in the mood to actually attend one of these shows, there are few better ways to spend a summer evening than setting up a picnic outside the gates and listen from afar. You can see the entire lineup here.

ATP NY is Pretty Intense
These days, with a new American music festival getting announced for seemingly every conceivable weekend from now through labor day, it's tough to get too excited about another one. There are really only so many Jack Johnson jokes to tell before you just start ignoring them completely. BUT...All Tomorrow's Parties has managed to put something completely different together for the end of the summer that's actually worthy of distinction. The September fest has been curated by My Bloody Valentine, and will take place at a country club in Monticello for a small crowd of about 3000 attendees. Aside from MBV performing, they've rounded up a number of their gazey, earth shaking contemporaries, as well as those influenced by them. This includes Mogwai, Built to Spill, Polvo, Shellac, F*** Buttons and a whole bunch more; many to play their classic albums in their entirety. There'll be no camping, no tailgating or large drunk crowds here. If you're an old school music nerd who shuns festivals, this was created for you! The first batch of $225 three day tickets, with fancy-sounding on site hotel packages available, went on sale this morning.

Sound Fixed
Sound Fix, one of the last remaining record stores in Williamsburg, has been booking free shows at their cafe for years. Not too long ago, the store renovated the space into more of a bar area, and recently they've had some beef with the local law enforcement over being up to speed with all their licenses and codes. They've been visited by the DOH, got the liquor license revoked and eventually had to completely close down until they got all their troubles sorted out. So after all that, they finally got back open this week. Officially. Regina Spektor played an afternoon set on Monday in honor of Record Store Day, and on Wednesday they played host to Tokyo Police Club. It seems that, for now, their troubles are behind them. Hopefully they can play by the rules going forward.

#all tomorrow's parties
#ATP
#celebrate brooklyn
#festival
#Music
#sound fix
#week in rock
Do you know the scoop? Comment below or Send us a Tip
A new Gothamist is coming! We’ve moved comments over to our beta site. Click here to join the conversation and get a preview of our new website.