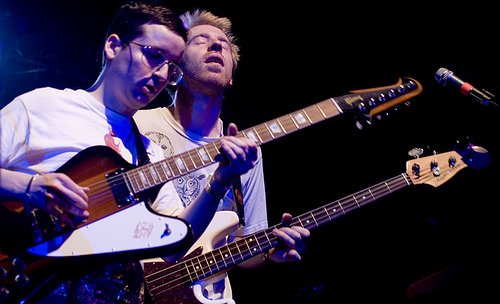 Hot Chip, Almost Ready for the Floor
We've come around on Hot Chip in a big way over the last few years as they've risen to stateside popularity. Their latest album is a total burner, highlighted by a killer lead single, Ready for the Floor, and the last few times we've seen them live it's been a blast. So needless to say, our expectations for last Saturday night's show at Highline were through the roof. Did they live up to them? Nearly. It was a great time, the crowd was into it and the songs still rule. The band, however, seemed a touch off that night. It may have been a due to the band not having played these songs a whole lot live before, but, especially with the new jams, it didn't seem to flow as well as we'd hoped. Obviously you don't go see a band live to hear them play the songs exactly as they are on record, but their minor tinkering seemed slightly for the worse. That said, a mostly great show, and we can't wait for them to return to Terminal 5 in a few months. (Pic via Ryan Dombal's Flickr)

Cat Power Bombs, but It's Not Really Her Fault
Now, despite our good experiences, it's pretty darn clear that Terminal 5 is not a popular venue. If you're not convinced, check out the comment threads in any blog post after a show there. But even while the merits of the space can be contended, there's little debate that the venue would not be a good spot to see a performer such as Cat Power. Someone who shines on those powerful, solitary moments, relying on the clarity of the sound and attentiveness of the audience would not do well there. And so, many were not too pleased with the result. A note to NYC concertgoers: your favorite band will come through town more than once. If they're playing a venue that seems like an awful match (See also: Justice at WaMu theater). Sit it out, wait for them to come back. They will, and it'll be better next time.

Robyn Was Here
Every couple years, an obscure Swedish pop-princess wins over the hearts and loins of the American indie crowd and attempts to make a big break. A few years ago, there was Annie. Now, we have Robyn. She made her American debut performance at The Highline Ballroom on Super Tuesday, and it was a hit. Unlike Annie, whose live show left much to be desired, Robyn is a pro. She handled the stage with confidence and experience gained from many years performing across Europe. While there were some complaints the set ran a bit short, few left the club disappointed. While nobody expects a mainstream sensation to sprout from here, it seems she has effectively won over her niche. That's all anyone was really hoping for.