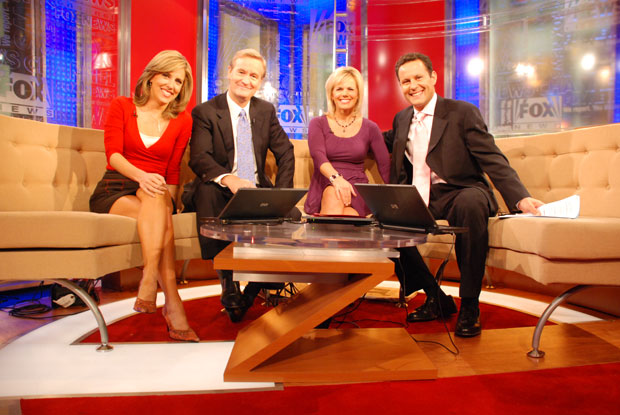 We recently visited Fox News Channel’s morning show Fox & Friends. Unlike most of the other morning shows it is a freewheeling kind of crazy romp that definitely has “Fox attitude”.

We don’t know if that “Fox attitude” is what gives a different on-set vibe compared to other news sets, but it did seem like less of a precision military operation than their competition at the Today Show. It could be that the show is unscripted, so the anchors are thinking on their feet making the show seem more organic than other shows (which are almost all tightly scripted).

Another differentiating characteristic is its interactive component: Viewers e-mail, call in and become a part of the show, and the people outside the studio are “bit players,” too. They average about 1000 e-mails per day and the anchors log on during the breaks to get instant feedback on what they've done.

Watching this sausage get made was not as dull as being on other sets, and both cast and crew seem to be having genuine fun getting the show on air. The anchors are also just as fun and crazy when the cameras are not rolling, which might be why they have been the #1 cable news morning show for over five years and in some places even beat out the CBS Early Show.

The show and network has some critics (like Media Matters) and provides fodder for comedians (like Stephen Colbert). But how do those being criticized and made fun of like it? The show’s news anchor, Alisyn Camerota says, “We’re helping them out.” Anchor Steve Doocy told us, “I love it. It is free publicity for us because it is to a whole new audience that doesn’t watch news a lot. They get their news from the phony news channels.”