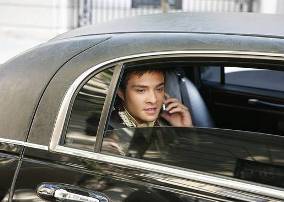 While last week was definitely Long Island City week on Gossip Girl, this week's version of the "exclusive" Upper East Side dropped squarely in Brooklyn Heights. The opening scene, featuring some sort of perverted choir singing Fergie's "Glamorous," was shot on location at Packer Collegiate Institute's 3rd floor chapel. The gang revisited Packer later on at the contrived 'Ivy' reception, which went down in the school's backyard garden. From there, the gang didn't have to travel too far for their extracurriculars. The fantastic field hockey practice/Serena-Blair catfight took place only a few blocks away from the school at the base of the Brooklyn Bridge in Cadman Plaza Park.

It took about 56 minutes into the hour long episode before there was an actual uptown location spotted. The final rainy apology scene was beside the always stunning Bethesda Fountain, right smack in the middle of Central Park.

Also, a note on NYC's private transportation...Someone should tell bad boy Chuck that nobody rides in stretch limousines anymore around New York City unless they're bridge, tunnel or Eurotrash. Especially not ones with Taxi and Limousine Commission license plates. Have someone drive you around in a Black Suburban or Yukon the next time you want to stalk Serena around town. For starters, it'd be a tad less conspicuous.