After more than 40 years hosting artists, exhibitions, performances, and installations, Tribeca's legendary 10,000 square-foot Clocktower Gallery is closing this weekend. The sale of the gallery's landmarked, city-owned building at 108 Leonard Street to real estate development company Peebles Corporation was part of Mayor Bloomberg's plan to reduce government office space by 1.2 million square feet. The building will be turned into luxury residences.

The Clocktower Gallery was instrumental in shaping the burgeoning alternative arts scene in the city. Among its most memorable exhibitions: a Dennis Oppenheim installation where the artist placed a dead German shepherd on top of a legless electric organ. As rigor mortis set in, the tones would change. (The ASPCA provided the deceased dog).

Michelangelo Pistoletto's piece was shut down by the Board of Health because he used bones that had not been properly cleaned.

"We're the last of the alternative space movement of the '70s," says David Weinstein, programming director for the Clocktower Gallery and AIR, Art International Radio, the Internet-based art radio station based there. "It changed the world. It went from everybody wanting to be in museums with white pristine walls and track lighting, to, let's embrace the architecture and our art will coexist and interface with the environment we put it in."

When Alanna Heiss, who also founded P.S.1 Contemporary Art Center, acquired the space in 1972, it was used being used for storage, piled high with canned goods and various detritus. This was back when New York City was cheaper, emptier, and more crime-ridden—when a starving artist could afford to live and work in Lower Manhattan because nobody else wanted to.

"I wanted a space that was utopian and dreamlike in a way," Heiss says. "You have to want to go there. It's not something you pass by."

Crystal Stokowski is the gallery's final artist in residence, having arrived November 28 when other occupants were already packing up and leaving. Her current installation, which includes psychedelic screen prints inspired by a Polynesian tale about an ancient surfer, uses all repurposed and found materials. If you visit, she'll teach you how to screen print t-shirts and sew clothes.

"Yesterday somebody from the fourth floor from the courts, came up on his lunch break. He had his tie on, and he was on the floor, and we printed two shirts. That's what I want. Everybody is an artist."

Lary Lamay, another artist in residence, has the wall of his temporary studio covered in eight-track tapes. You can take one down and throw it in the player, but Lamay won't guarantee what you'll hear. "Some of them work, some of them break when you play them," he shrugs. As a volunteer he helped build the recording studio where his latest project sits, a massive contraption made of springs, weights, motors and speakers that he calls a kinetic sculpture. Every vibration becomes sound which eventually builds to a thumping crescendo that fills the room.

A photographer by trade, Lamay has been documenting various artists' work here since the 1970s, though no complete listing exists of those who have exhibited over the last four decades.

As for what will become of Heiss, Weinstein, and the rest of the team that run the gallery and radio station, their plans reflect what is happening with art-making throughout Manhattan: it's being squeezed out to other boroughs. They are partnering with Pioneer Works in Brooklyn and the Knockdown Center in Queens, organizations offering short-term space and artistic collaborations. They'll also be hosting pop-up shows in Times Square and keeping some administration offices in Midtown. Throughout these various 2014 ventures the group will search for a permanent space somewhere in the city, a daunting task.

"The Department of Cultural Affairs changed a lot of the way money flows out of the city into the arts organizations, and I think for the better over the last twelve years," says Weinstein. He calls Bloomberg an amazing supporter, but "at the same time, the real estate changes which also came from him were terrible for the arts." 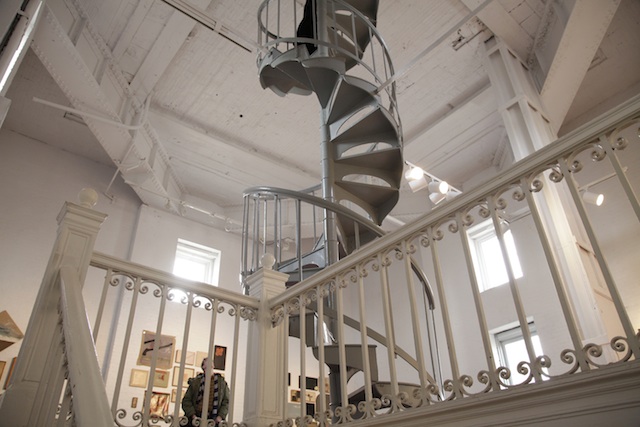 Peebles Corporation is donating 15,000 square feet in the renovated 108 Leonard Street to a community space. Theoretically, a PR spokesperson for the developers told Gothamist, "the Clocktower Gallery could occupy that space," though no official offer has been made. When asked if she would stay if given the chance, Heiss's answer was an emphatic "of course," but the two parties have yet to come to terms on any such agreement, and the possibility of a revamped Clocktower Gallery in 108 Leonard seems remote.

What happens with the building remains to be seen. Renovations will start next year and Peebles Corporation says they will preserve the historical integrity of the 1898-built Clocktower Building designed by McKim, Mead & White, the architects behind Penn Station, the Manhattan Municipal Building, and the Bowery Savings Bank, including the ornate four-sided clock itself.

The gallery's eponymous clock is the largest mechanical one in the city. Every week Marvin Schneider, New York City's official clock master, arrives to wind it by hand, as he has been doing since the late '70s. Peebles Corporation says this ritual will continue. But, as Heiss says, the bell will toll for Tribeca and its residents, but "not so much for art," the way it used to. At least not for now.

Thursday, Friday, and Saturday are the final days to visit the Clocktower Gallery. More info here.

Rachel Friedman has written for The New York Times, New York Magazine, and BUST, among others.

#Alanna Heiss
#art
#clocktower gallery
#moma ps1
#peebles corporation
#tribeca
#longform
Do you know the scoop? Comment below or Send us a Tip