Gondry Filming at Home in Williamsburg 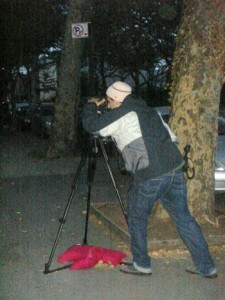 After being known for the spot that Kate Winslet's character in Eternal Sunshine of the Spotless Mind called home, Williamsburg’s Orient Avenue became the real-life home of director Michel Gondry. It then became the real-life squatting spot for many local crackheads, and following a brief stint of stabbiness, it's now going Hollywood again! Sort of. Flavorwire reports that Gondry's latest project appears to be filming not only on the street, but right at his very own house.

Last night I passed by two guarded, trash bag-covered cameras in front of his house that had been set up earlier that day. When I asked the guys watching the equipment if Gondry was involved, they smiled but would not confirm it. When I then asked if Michel Gondry was paying them well to stay up all night, they said yes.

I returned at 7 a.m. this morning and spotted Gondry busy sweding with a group of lackeys. One of them joked that they were working on a student film; Gondry told me that he was shooting a music video but would not reveal the artist.

It's good to know he didn't go missing after all, and Gondry-philes can see him in person tonight at the Strand where he'll be signing copies of his book. Get creative and trick him into answering which band this is for.

Photo of filming by Caroline Stanley/Flavorwire.