Golden Globe Nominations Announced, But Will Anyone Show? 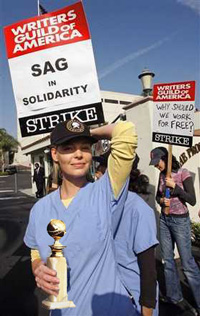 Early this morning Hayden Panettiere and other Hollywood elite looked ready to hit the town for a night out even though it was 5:30am. They were announcing this year's Golden Globe nominees, often a good sign for who will be nominated for that other gold statue. All in all New York-based shows and movies fared well as the envelopes were opened sheets of paper were read from.

The big motion picture nominees were Atonement, Charlie Wilson's War, No Country for Old Men and Michael Clayton, while the big TV nominees were Damages, Longford, 30 Rock and Bury My Heart at Wounded Knee (which was produced by Law & Order producer Dick Wolf). We reserve huhs for nominating Californication as Best TV Comedy and David Duchovny for Best Actor TV, but we supposed the Hollywood Foreign Press really loved The X-Files.

One concern is that if the writers' strike continues, the awards ceremony (set for January 13th) may be a little empty. In fact, producers are concerned the entire awards season may be lackluster and devoid of star power as actors join the writers in solidarity. It's unclear if actors' contracts include clauses that require them to appear at awards shows, but we bet studios will think about putting them in!