Goatham City: A Herd Of Goats Will Munch On Riverside Park All Summer

A few years ago, a tribe of poison ivy-munching goats were brought in to help clear Prospect Park of invasive plants and weeds. A month later, a different highly-specialized team of mugwort-munching goats were brought out of retirement to help deal with weeds that had taken over part of Brooklyn Bridge Park. Now, another team of goats will be called in this summer to Riverside Park in Manhattan, for a project that the Riverside Park Conservancy is calling Goatham. 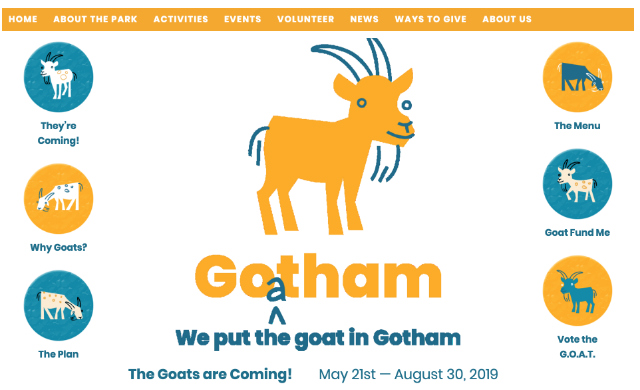 Starting Tuesday May 21st through August 30th, a herd of goats will be brought in to help clear out the part of the park between 119th and 125th streets—an area which is fenced in, so the goats hopefully won't be able to run amok on the West Side Highway (though there is the 105th Street Dog Run if they are hankering to chase some balls).

"The goats, who have all retired from former careers, are from a local farm," the Riverside Park Conservancy writes on their special Goatham website. "They will take up residency for the summer on sloped terrain that is rife with invasive plants. Since goats are naturally effective weed whackers, putting than to work in Goatham is like treating them to an all-you-can-eat buffet. It’s hearty for the goats and good for the environment."

The goats will be tasked with helping graze on aggressive greens that can harm local plant species, deplete the soil’s nutrients, disturb nesting sites and affect water flow and retention. Their targets will include Porcelain Berry, Wineberry, Bittersweet, Multiflora Rose and Poison Ivy. 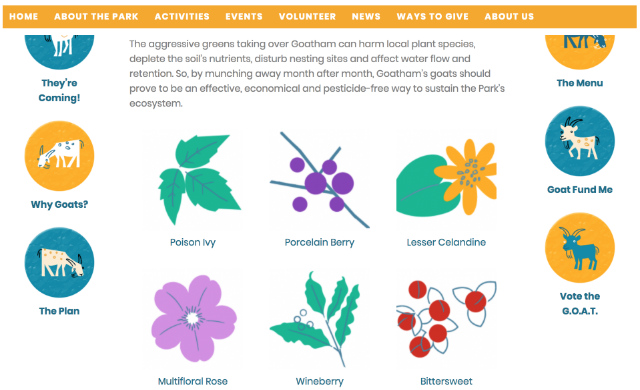 "Throughout the season, the goats will continuously consume the weeds all the way down to the roots, which stunts the plants’ normal growth trajectory by making them start all over — only to be eaten again," the website explains. "After a few months, the plants’ ability to grow will have been weakened, and perhaps eliminated altogether."

The Riverside Park Conservancy hasn't yet announced the names of the lucky goats who have been called up for this task, nor whether locals will have specific chances to meet them, but you should check back at their website for more updates.

Below, a flashback to 2016 when Horatio, Eyebrows, Minnie and Hector arrived in Brooklyn Bridge Park to nibble on mugwort and clover.