I'm standing in a carpeted elevator shaft in Tribeca, staring at a row of plastic spoons. A disembodied voice with a British accent reminds me that they have "the hardest job at the table." I see the large, flat spoons given to you with your take out soup, the ones that never quite hold enough liquid and are pleasant to the bite. I begin to anthropomorphize the spoons. How can we be so heartless as to toss away the tiny ones seconds after we sample that weird flavor of gelato? Just as my mind reaches into my childhood for those giant, grey spoons Wendy's pairs with their Frostys, my eyes turn to a collection of watches with Saddam Hussein's face on them.

This is the wonder and the beauty of Mmuseumm, which recently christened the collection comprising its third season with a bodybuilder and a tiny man with a feedback-y microphone asking patrons, "What do you love?"

Al Goldstein's hilarious dictated personal reminders are still there, as is the shoe an Iraqi threw at George W. Bush. Season three includes the spoons (donated by designed Chee Pearlman), a 3D print of the Taung Child Skull, 200 mosquitos from New Delhi killed mid-bite, and a homemade survival cane from a security guard who works near Times Square. 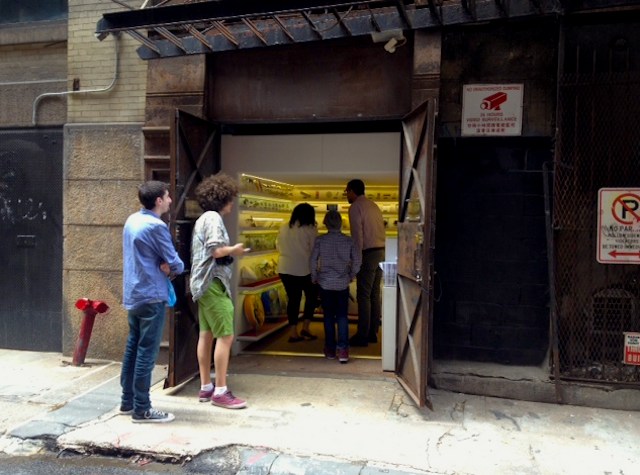 Some objects are meant to be taken as they are—like a collection of mosses. Others are appetizingly complex: censored Saudi Arabian pool toys—with any trace of transgressive feminine immodesty airbrushed out—provoke laughter and rage.

The exhibit that perhaps best encapsulates Mmuseumm's original blend of the natural, the human, and the surreal, is a collection of natural Styrofoam "rocks" from Maia Ruth Lee. These bits of discarded foam somehow wound up in the East River and were weathered down by the elements. They are pollutants that perfectly mimic stones. "Even with this horrifying reality in mind, the uncopyable artistry of mother nature is something to take time and marvel at," the voice intones. Definitely.

Mmusemm is located in Cortland Alley and is free and open on weekends from 12 p.m. to 6 p.m.