In the wake of mounting outrage over allegations about R&B singer R. Kelly and his treatment of young black women, attorney Gloria Allred said that one of his accuser's would be talking to the NYPD.

Allred appeared at a press conference with Faith Rodgers, 21, who sued Kelly for "mentally, sexually and verbally" abusing he— including allegedly locking her in rooms, engaging in "non-permissive sex," and infecting her with herpes. Rodgers was also featured in the Lifetime documentary series Surviving R. Kelly. After the series aired, a Facebook page was launched to defend him from the allegations—ranging from exploitation of minors to sexual abuse and kidnapping—by smearing accusers. (The page has since been removed.)

Allred said that private photographs of Rodgers had been posted to the now-deleted page. Another attorney for Rodgers, Lydia Agu, said she received a letter last year from Kelly, 51, saying, “Please advise Ms. Rodgers, your client, to abandon this heartless effort to try to destroy my musical legacy for selfish, personal enrichment." 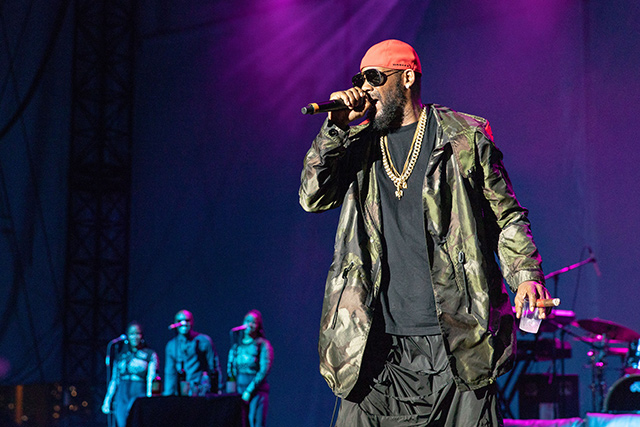 According to the Chicago Sun-Times, the rest of his letter read: "If she persists in court action she will be subjected to public opinion during the discovery process. For example, my law team is prepared to request the production of the medical test results proving the origin of her STD claim, as well as 10 personal male witnesses testifying under oath about her sex life … If Ms. Rodgers really cares about her own reputation she should cease her participation and association with the organizers of this negative campaigns. Counter actions are in the developmental stages and due to be released soon."

Kelly's lawyer told Buzzfeed, "It obviously was not authored or signed by Mr. Kelly, nor sent on his behalf."

Though he was acquitted of child pornography charges in 2008, Kelly's behavior and relationship with young women—he married the late singer Aaliyah when she was 15—was not unknown; but now, some say with hindsight, it had mostly been ignored for years thanks to his network of protecters. The Chicago Sun-Times' first investigative story about allegations of Kelly as a sexual predator was published in 2000, and one of the reporters, Jim DeRogatis, continued to follow the story over the decades at a number of publications.

His 2017 Buzzfeed story, detailing how parents claimed their daughter was being held against her will by the singer, sparked a new wave of attention and more women coming forward about Kelly's alleged "cult" and his "brainwashing" of young women. During an interview at Coachella, the singer Vince Staples pointed out, "R. Kelly never went to prison, and he's a fucking child molester."

"No woman should be victim shamed, harassed or retaliated against because she asserted her rights and spoke her truth," Rodgers, who says she met Kelly when she was 19, told reporters. She added, "Taking a stand against R. Kelly, someone who has been termed ‘the King of R&B’ and is loved by many, has not been easy."

Allred said that Rodgers was going to be meeting with the NYPD, "We have an appointment today with the New York City Police Department who has asked to meet with Faith in furtherance of their investigation into potential victims of R. Kelly."

Also at the press conference was Michelle Kramer, the mother of Dominque Gardner who was allegedly held against her will by Kelly in Atlanta (Garder was rescued). Allred also said, "Prosecutors in Chicago and Atlanta are also seeking information from potential victims and we plan to offer them our cooperation as well."

#aaliyah
#gloria allred
#R. Kelly
#sexual abuse
#surviving r. kelly
Do you know the scoop? Comment below or Send us a Tip