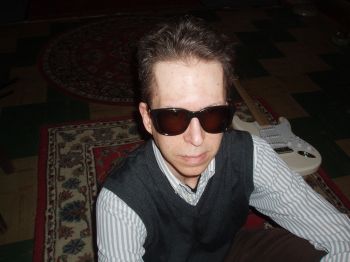 Glenn Mercer was the frontman of a band called The Feelies that burst into the New York music scene in the 1970s. By the '80s their debut album, Crazy Rhythms, was voted one of the top 50 albums of the decade by Rolling Stone magazine. R.E.M., who they later toured with, cited the album as a major influence. By 1991 they disbanded, but Mercer continued making music on his own. Rumors of a reunion this summer were confirmed when it was recently announced that The Feelies would join Sonic Youth at the annual River to River Festival free show on July 4th in Battery Park. Mercer has also released his first debut solo album, Wheels In Motion (2007), and is heading back to his old stomping grounds -- catch him at Luna Lounge this Saturday.

The Feelies were embraced by New York in the 80s, do you have a favorite story from playing around town back then?
Actually, the most time we spent playing in NYC was during the late 70’s. That was a very exciting time in the New York underground music scene. It seemed as if the only new original and innovative music was coming out of Manhattan and we were inspired by a lot of what we heard. I don’t really have a favorite story that stands out, but I recall fondly hanging out with Terry Ork, who was a major behind-the-scene figure at the time. I also remember having to sleep at the Mudd Club when our car broke down after a show one time.

Did you have a favorite venue during that time?
I liked playing at CBGB’s for the sound and Max’s Kansas City for the atmosphere and the Bottom Line was also a great venue.

What have you noticed has changed the most about the NY music scene over the past few decades?
At the time when the Feelies started, struggling musicians flocked from all across the country to New York City to follow their dreams and they were able to survive on a very basic level. Loft space was still affordable and there were places to play even when starting out. Now, that is not a reality and musicians and artists don’t have that kind of support system anymore.

How long have you been playing solo since The Feelies disbanded?
After the Feelies stopped playing, Dave Weckerman (Feelies percussionist) and I formed a band called Wake Ooloo and we released three records in the 90’s. I guess the idea of doing a solo record came a few years ago when I realized I had enough songs to fill a whole disc.

Is there a chance of a reunion?
We actually played again recently at my house and it went very well. We’re planning some reunion shows for this summer, as a matter of fact.

Who is in your band today?
My new band consists of Dave Weckerman on percussion, Vinny DeNunzio (another former Feelie) on drums, Bob Torsello on bass and Adam Berardo on rhythm guitar.

How has your sound changed, transitioning from The Feelies to your own solo material?
That’s a hard question to answer because I see it from the inside-out. From that perspective, it’s not that different, because the core, for me, is the guitar/vocals, which remains as the musical thread that connects the past and present songs. Also, now I’m playing with the same line-up of instruments. Most of the reviews for the record have pointed out the similarities between the sounds. Another factor is that all of the guest musicians on the record are former members of the Feelies.

Are there any NY-area bands today that you've been listening to a lot. A lot of current bands reference you as an influence, have you been inspired by any "up and comers"?
I like the Strokes, but they are hardly “up and comers”.

Please share your strangest "only in New York" story.
I was mugged on my way to the studio while we recorded Crazy Rhythms, but that can happen almost anywhere, so it doesn’t really fit that category. I can’t think of anything right now.

Which New Yorker do you most admire?
That’s another tough one. Maybe I’d pick Andy Warhol, even though he was from Pennsylvania. The only person I know who was born in NYC is my wife, who I surely admire.

What's your current soundtrack to the city?
The music that makes me think of the city the most would be Television and Patti Smith. And the soundtrack to Taxi Driver by Bernard Herman captures the atmosphere in a perfect way.

Best venue to play/see music in NY.
Now that the aforementioned venues are gone, I couldn’t really say because I don’t go to see bands very often. I’ve heard some great things about the Bowery Ballroom, so I’m looking forward to going there.

#Glenn Mercer
#interview
#Music
#the feelies
Do you know the scoop? Send us a Tip