GIRLS Recap: What Will We Do This Time About Adam?

There are only two more weeks left of GIRLS after this, but last night's episode almost felt like the finale, or at the very least, the penultimate episode. It's a powerhouse without working too hard, and it's Hannah's best moment, I think. Plus, no Marnie! Best episode ever! So let's dig in.

So. Adam has decided he can't let go of his "history" with Hannah, and now he wants to raise her baby together. He breaks the news to a chillingly stoic Jessa before telling Hannah he misses her and wants to be with her. "We don't have any more time to waste," he tells her, "Let me show you who I've become."

Hannah, after some small hesitation, lets him into her apartment and back into her life, and for a moment they are both all in. They sleep together. He talks to her belly. He fixes things in the apartment. He's there for her when Laird declares he is actually the one meant to raise Hannah's baby with her. He listens to her talk about how afraid she's been about being a mother. He shares stories with her about his childhood. He tells her not to be scared. He throws away her sugar soda. He goes shopping with her for baby supplies and promises to build her furniture. He suggests they get married. He promises he will be there. And maybe he would have been.

But Adam and Hannah aren't meant to be, something they both realize over soup at Kellogg's Diner in Williamsburg. Our glimpse at an alternate reality where Adam and Hannah become a South Brooklyn stroller couple is over before the air conditioner even gets fixed, and Adam goes back to Jessa.

Meanwhile, Jessa doesn't take her separation from Adam with quite the stride she puts on for him. Her panic takes over and she attempts to order all the premium television channels, vomits, visits with Laird and Baby Laird, and freaks the fuck out before trying to find comfort in her old skin. She pops into a bar, puts her cigarette out in a seltzer, and hooks up with a sad barstool stranger in the bathroom—just like the old Jessa would have, but here she cries, and tells him, "I don't want you."

According to this week's Inside the Episode, the shot of Jessa walking into the bar is shot-for-shot the same as the scene in Season 1, when she hooks up with a stranger in the bar. Here, though, Lena Dunham points out that the old tricks that comforted Jessa don't work anymore.

I cannot stand what they've done to Jessa over the course of this show. She was always clearly a character with serious problems, but they've turned her into an erratic villain, and she doesn't deserve it. When they aren't just making her seem cruel, they're bringing her too far out-of-character in other ways. But they did her some justice this week, at least, and tapped into her humanity. I just wish they'd given her more time earlier this season. More importantly, she shouldn't have let Adam back upstairs... but maybe that's the love story that's supposed to work out. 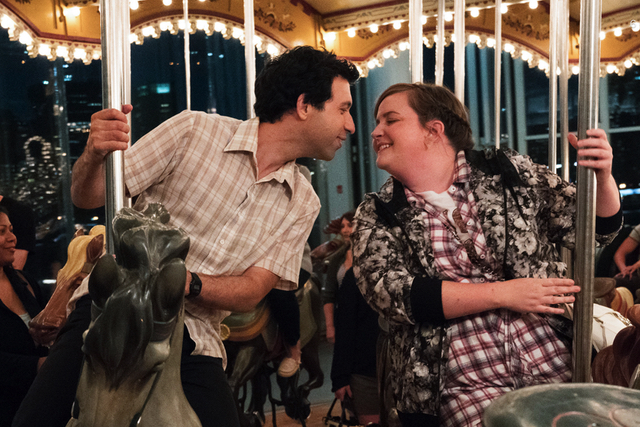 As for my favorite plotline—Ray and Shosh bump into Aidy Bryant (from Tokyo!) Though Shosh tells Ray he's probably going to hate Aidy (Abigail in the GIRLSverse), RAY FALLS HEAD OVER HEELS FOR AIDY. This twist is so much better than Hannah's pregnancy. Shosh is visibly disturbed by the connection—Ray always existed as a possibility for the Big Love in her life. She lost her virginity to Ray, she spends all her time with Ray, and it seemed, for a time, that Shosh and Ray were headed for forever-and-always. But as Jenni Konner and Lena Dunham point out, "After being beaten down by rude millennials" Ray deserved someone happy and a little less drama-prone.

It may be devastating to Shosh for a minute, but usually things don't work out for a reason, and it's healthier to move onto someone new than recycle old flames, as tempting as the familiarity may be. On the other hand, good for Ray! The poor guy really needed to catch a break, and Abigail is a joy.

Next week on GIRLS: All four GIRLS end up in the same room, somehow.