I've long thought that GIRLS is at its best when it tells focused, mostly-contained short stories about damaged but sympathetic characters—think episodes like "The Panic In Central Park," "Beach House," "Flo" or "One Man's Trash," any of which you could jump into and appreciate without necessarily knowing much of the backstories or ongoing season-long storylines. The more focused the themes and limited the setting, the sharper the episode. One of the major criticisms of the show has been the fact that the four titular girls are barely friends at this point (Hannah and Marnie are the only ones who seem to hang out), and often when the show tries to cram a lot of their stories into one episode with little to no crossover, everything is spread out far too much.

Last night's episode split the difference between those two sides—there were three main plot lines, and two of them ended up crossing over (only slightly, but meaningfully so). It wasn't the best episode of the season so far (that would be "American Bitch"), but it was an important stepping stone toward the end of the series, showing big growth for a few characters (Ray, Hannah) and some of GIRLS' exquisite patented cringe humor (Loreen's epiphany, Adam/Jessa's horrible movie).

Those aforementioned great episodes of GIRLS are the ones where you can immediately summarize it like, "the episode where Hannah enjoys a long weekend with a handsome doctor," or "the one where Marnie hangs out with junkie Charlie." When you look back at this episode, you might remember it as, "the one where Hannah's mother eats too much weed candy." On the surface, Hannah is still grappling with whether or not she wants to continue her unplanned pregnancy (currently the size of a lentil bean), making a hilarious pros/cons lists ("I DON'T ENJOY GETTING MY NIPPLES SUCKED"). Of course, she leaves out the most important thing: how the fuck is she gonna pay for the baby?? That seems kind of important. And she's no Lorelai Gilmore!

The real pros and cons come courtesy of the first two people she tells about it: her mother and Elijah. Instead of "critiques, warnings, admonishments...admonitions," Loreen immediately supports Hannah's decision and even lights up for a moment ("Wow, this is not what I was expecting"). But it's tinted by the deep depression she's fallen into ever since Tad came out. "You make these choices when you're young and you have no idea how they will play out," she says ruefully. "I can't even go to the movies anymore because I hate going home." Who would have thought that GIRLS would eventually nail the profound loneliness of being a woman over 60 dealing with a sham marriage? With her ominous comments about Hannah's baby growing up without a grandmother, Loreen is definitely on the edge of a cliff.

But, as Elijah suggested, she is also a lot more chilled out than anyone realized. So chilled out, she scarfs down a few too many weed gummies, leading to a frantic search for her by Hannah and Elijah (as he's coming down off an Adderall binge) when she goes missing. It culminates in the funniest part of the episode: "I just want you to know every time I look at your baby, I'm gonna see my own death," Loreen says woozily. And then she vomits—like a baby! How can you people say GIRLS isn't funny?!? Have you ever seen an adult throw up in a restaurant like a baby? I have, and IT IS FUCKING HILARIOUS. 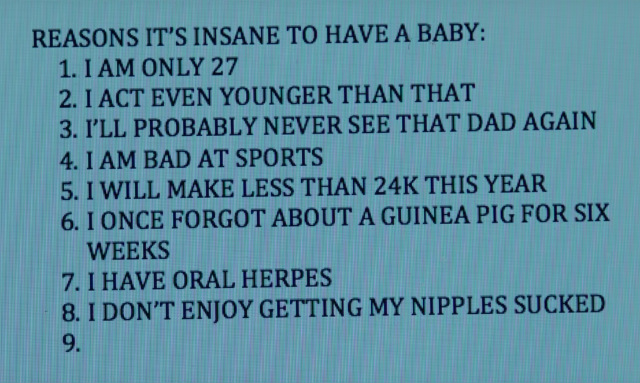 Elijah, in his infinite, bitchy wisdom, is less psyched about the whole pregnancy thing. That may be because he's depressed, or like Ray, is slowly realizing he's been stuck in neutral and wasting his potential for awhile now (is he more hurt that she didn't tell him, or that she's moving forward in life without him?). Either way, he freaks out when he learns about Hannah's lentil bean (they fight in the restaurant's kitchen, which seems pretty unbelievable to me, but that's besides the point). "Another reckless, impulsive, typical-Hannah decision, like cutting your own hair or cyberbullying that girl from Barnes and Noble," he says, before punctuating it with the most hurtful thing he could say: "I'm gonna say this to your face because no one will have the guts to: you're gonna be a terrible mother."

He might be a dick about it (he definitely is a dick about it), but Elijah might be right to poke at his best friend's motivations, considering Hannah's history and, you know, lack of a viable plan to feed and clothe her child (my understanding is that she's a fairly active freelance writer, but that isn't exactly a lucrative job even when you're good at it—and it's hard to tell just how well she's doing). But his harsh words fall on deaf ears: it seems like Hannah has already fully committed to the child, nipple-sucking be damned.

Further proof: Hannah runs into her doppelgänger "Mirah" (played by Daisy Eagan, who really is a dead ringer for Dunham) from Adam/Jessa's movie on her stoop at the very end of the episode. "Kids are super easy. It's being an adult that's hard," she says, and at first I really hated what seemed like a trite ending (kids seem PRETTY complicated to me). But maybe there's something to it. It's not that kids aren't complicated, it's that you can handle a kid if you can be an adult—but if you can't be an adult, then hoo boy, you are gonna have some serious trouble with a kid.

The Hannah/Elijah/Loreen plot may be the main storyline, but Ray's arc has been my favorite these past two episodes, culminating here with him finally, mercifully, blessedly breaking it off with Marnie. NOT A MOMENT TOO SOON GUYS. Marnie looks like she wants to kill herself every time Ray mentions Hermie's VHS collection, consisting of Sam Peckinpah, Steven Wright, and some softcore classics. She also is really into things like her online therapist and quiet pilates classes ("I'll skip it, I'll be a little misaligned this week, I think I'll be OK"). Despite all her therapeutic mumbo jumbo, she can't really be present with Ray for ten minutes in his time of need. This is a relationship that always seemed to be based on lust, projection and mutual loneliness, and it's one that needed to be put down.

While they may have no emotional connection, Ray does have one with Shoshanna that has deepened in surprising ways over the course of the show. She is empathetic to Ray's mourning, she admires his positive qualities, they share a sense of humor, and they are supportive of each other. They are the two characters who have most grown up since season two (when they were still a couple). I can't believe I'm typing this, but of all the possible GIRLS endgame relationships/resolutions, the thing I want the most is for Ray and Shosh to get back together.

If Ray and Shosh are the only romantic subplot I can fully support on this show at this point, then Adam and Jessa are the nightmare funhouse mirror version who I dread seeing. They are hard at work at their "raw and honest and real" short film, and in the grand tradition of Seinfeld season four or Annie Hall, they go full-meta, recreating key moments from Adam's romance with Hannah from the first season. Adam seems to be exorcising some demons and possibly conflating his relationships with Jessa and Hannah, while Jessa is just a monster in a white suit (a white POWER suit, as Ilana might say). Of course they're making an artsy indie movie, and of course this plotline is making my eyes bleed a little.

I really, really, really hope to god this isn't leading to some sort of reconciliation between Hannah/Adam. It was an important relationship for both characters, but it would be regressive for them to reunite...whereas Adam/Jessa are a perfectly symbiotic, two-headed ego beast who deserve one another. If Adam and Jessa were a drug, they would be cocaine mixed with ether mixed with more cocaine. If I met Adam and Jessa in real life, I'm convinced they would beat me up and then ask to borrow money.

What scares me the most? I might be too scared to say no.

The voice of the wise old woman Colin Quinn interviews was my Grandma Molly. 94 and still rocking! Also seen in This Is 40. Don't Blink! pic.twitter.com/LSf2JGlus2

And now, here is my Official Girls Unlikability Power Rankings (to clarify: this is about the characters, not the actors or the performances—Allison Williams is masterful at this shit). This list is unimpeachable. Accept the mystery.

4. Jessa: the human incarnation of cocaine literally wearing a white power suit
3. Marnie: a narcissist whose online therapist is on vacation
2. Hannah: a freelancer who once forgot about a guinea pig for six weeks
1. Shoshanna: I have no idea what she does for a living at this point and she's barely on the show, but whatever, she's cool

#girls
#girls recaps
#television
#tv
#original
Do you know the scoop? Comment below or Send us a Tip