Hannah and Marnie have never been farther apart in their lives than they are right now—and certainly, Hannah has never been the more together of the two. We started this week's episode of GIRLS with Hannah inviting Marnie over for a special dinner in order to catch her up on what's going on in her uterus. (Last week I mentioned that the later seasons have had some pacing problems because the four titular girls are barely friends at this point with the exception of Hannah and Marnie, so it was nice to see that connection reinforced immediately.) People finding out about Hannah's pregnancy—and their varying, mostly horrified reactions—forms the backbone of the episode. Hannah's march toward maturity, kicked into high gear by her (possibly reckless) decision to keep the baby, is making everyone take a hard look at where they stand in their own lives, whether it's Elijah with his theatrical aspirations or Marnie and her endless man drama.

The opening scene establishes the through-line of the episode to come. It also contains one of the funniest lines of the episode (How did Hannah get pregnant? "How does anything happen? I went to the Hamptons"). But it is also a very important reminder that MARNIE IS THE ABSOLUTE WORST and any steps toward maturity we thought she made after her "Hostage Situation" breakdown (let alone her divorce/"Panic In Central Park" epiphany last season) are basically nil. "Ray was supposed to break the cycle, and anyway he was just supposed to be grateful that I even wanted to talk to him," she says with typical obliviousness. Marnie. MARRRRRRRNIIIEE. And this is all before the scat-alogical La Vue gig. (We'll get to that later.)

While Marnie is pretty much a dirtbag human being (this episode really made me wonder whether she should be lower than Jessa on the Official Girls Unlikability Power Rankings), there is a good reason why she and Hannah have remained best friends even as the other girls have mostly dropped out of each other's lives. After Hannah establishes that she's not fucking around with her, Marnie takes a moment to process the baby bomb... and she accepts it! She's supportive of her friend, which is more than everyone else can say. Hannah's father Tad and his partner Keith (they met in season five!) seem onboard, but the new couple also gets into an argument over whether she should tell Paul-Louis that reveals more about their own issues.

Adam is even less useful, left in shock on the sidewalk in Greenpoint (though he is able to ask whether the father is "Jan," lol poor terrible Fran). This comes when Adam confronts her (UH OH) outside of her apartment ("that's very three years ago") while trying to convince her to watch his new movie, one that he claims he made for her (UH OH). "This is like when everyone was telling me I had to watch The Wire," Hannah says, resisting his entreaties. "I didn't want to watch The Wire. I don't care about that show." Adam is acting manic, needy, and obsessive (UH OH). And in this scene, it suddenly becomes clear that despite the Mimi-Rose affair and his sextacular horrorshow of a relationship with Jessa, Adam maybe hasn't really moved on from Hannah (UH OH)—and it seems like he's projecting all over her with his talk of wanting to be "liberated from some very painful memories."

Anything that reminds people to watch The Wire is screen time well spent. https://t.co/ElQE3zftyK

And it is here that I must pause from the recap to shout to the heavens: DON'T DO IT. You know what I'm talking about. I see you (you, I guess in this case, being co-creators Lena Dunham and Jenni Konner) talking about "unfinished business" and "really real feelings" in the "Inside The Episode" video up above. NO REGRESSIVE RECONCILIATIONS. (It's like Drake's code, but less emo.) Adam/Jessa might be a trainwreck, but they are also a perfectly symbiotic, two-headed ego beast who deserve one another. I just really hope Hannah/Adam isn't the endgame for the show, and they really are building toward them moving on from one another without all the baggage of their failures.

At least Charlamagne Tha God‏ gets me.

Hannah better not fall in love with Adam again. Or maybe she never stopped?? #Girls ok back to NCAA tournament.

And then there's Jessa, who shows up separately to Hannah's apartment to air out their laundry. While Adam was shocked by the pregnancy news, Jessa is mostly upset that she had to hear it secondhand. It's her words that get through to Hannah ultimately: "For the record, I am a sociopath, but you are a fucking psychopath," she says. "And it's so much worse. Everything we did together happened. Whether you want to believe it or not, whether you want to remember it or not. And I am here and I know you and you can't just erase people, you can't just erase me. It's not how it works."

Hannah at least realizes that her relationship with Adam can't be erased, so she relents and begins watching his film. And even though it's terribly directed (Adam is a very bad director!) and the 47-minute masterpiece really does look like a super creepy love letter, Hannah feels all of those repressed emotions. Maybe she really hasn't moved on from Adam (UH OH). She also can't ignore the elephant in the room (the head of the waterskiing department at the rich ladies' surf school), and tries to contact Mr. Pookah Shell Necklace. Hannah realizes her mistakes AND attempts to deal with her problems directly all in the same episode? Maybe she really has gotten her shit together.

So Hannah decided to face her fears about her unborn child's father, Adam and Jessa had very emotional reactions to Hannah's pregnancy, and Marnie bitched about Ray and then disappeared for the rest of the episode. I think that's everything that happened last night, thanks for reading! 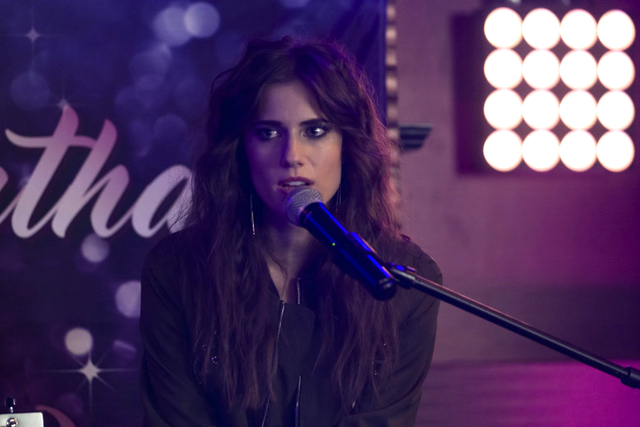 The Marnie/Desi storyline is cringe comedy that's been chiseled into an ice pick (describing Marnie as "Jennifer Lopez minus the acting chops" is just vicious). Throw in Marnie's desperate party mom Evie and her Jersey party rock crew (including the horrible friend who once dated Pras from The Fugees), and it reaches levels of pain too much even for someone who has seen every episode of Curb Your Enthusiasm multiple times. I had to watch most of the scenes at La Vue with my arm in front of my eyes. The second Evie volunteered to perform with Marnie I knew it would be bad, but who knew she would break out the scatting and things would hit "Stronger"-levels of bad?

The debut of the Michaels Sisters may be the ultimate example of Marnie's own oversized narcissism being thrown her in the face. The fact that she was so stuck in her own head ("on the wrong side of my 20s!") that she couldn't recognize that Desi (who now looks like your smelliest college hookup) was completely strung out shows just how toxically self-involved she is. After a season in which everyone has been yelling at her to stop being so narcissistic, Dunham and Konner suggest that this is her hitting her lowpoint, which would be a relief for all involved.

It's clear that the writers have been pushing each of the characters toward maturity in pretty dramatic, big ways this season (although we've barely had any time with Shoshanna, who has really been underserved this season). In previous seasons, plots ambled along to give room to the surprising, genuine moments that are GIRLS' bread and butter. This season, two people were killed off to get Ray to move on from Marnie; Hannah's uncharacteristic decision to the keep the baby made her start to grow up in a meaningful manner; and Adam & Jessa somehow became convinced that a navel-gazing, psychosexual amateur movie about Hannah would somehow free them of their considerable damage. I just wish that the plot gears weren't showing quite so much (and that there were more hot dog taco parties).

@girlshbo cannot wait for Sunday's Episode. I have had a blast working with you all. Tune … https://t.co/yweSiMCw8w pic.twitter.com/7xgzDuLfnI

#girls
#girls recaps
#television
#tv
#original
Do you know the scoop? Comment below or Send us a Tip