When we talked to Lena Dunham last year before her show Girls was set to premiere on HBO, she discussed the importance of New York City geography and locations, noting, "I was literally looking at a map of Brooklyn when I was writing." The production shoots all over New York, often using real locations that tend to be more on the indie side, and in last night's second season premiere, the real life highlight was Williamsburg's Spoonbill & Sugartown bookstore on Bedford Avenue, home of the best bookstore cat in NYC. Depending on if your DIY terrarium is half full or half empty, this could mean that Girls will either save your favorite smaller businesses from shuttering, or it will ruin them for you, possibly both... 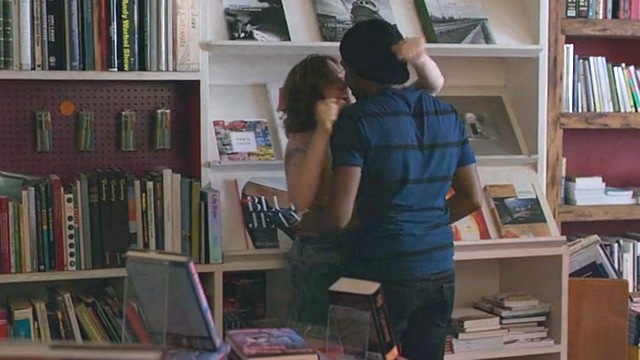 Remember when Sex and the City fans were flocking to Carrie's stoop and different locations that showed up on in the series? Remember what it did to Magnolia Bakery? Well word is that Girls is getting its own bus tour. On Location Tours is in the "very beginning stages" of developing what will most likely be a Brooklyn-centric tour, bussing tourists and fans around to places like Cafe Grumpy and 45 Bushwick Place.

As for Spoonbill & Sugartown, we've contacted the bookstore to find out what their experience was like, why the cat didn't get any screen time, and if they're stocking up on The Fountainhead, which also made a cameo in last night's episode. We'll update when, and if, we hear back.

UPDATE: Learn more about the books featured in the episode right here.

#girls
#Lena Dunham
#on location
#season 2
#spoonbill and sugartown
Do you know the scoop? Comment below or Send us a Tip