So here we are, at the end of GIRLS. It's been a long journey and I have a lot of complicated thoughts about the show as a whole. And though I've got mixed feelings about how showrunners Lena Dunham and Jenni Konner handled the finale, I think, ultimately, their choice makes sense. I'm sure some of you will disagree (a friend just texted me, "That was terrible.") But let's dig in.

It appears last week's episode, aptly titled "Goodbye Tour," was the finale of GIRLS as we know it. Not only do Shosh's and Jessa's storylines end with Shosh's engagement party, but the NYC storyline ends as well. The episode opens with Marnie wrapped around Hannah in bed—a throwback to the series premiere—but we're not in Greenpoint anymore, we're at Hannah's new, lovely home upstate.

Marnie, escaping a life of residing in her mother's home gym (the magic of GIRLS' writing is in the details), shows up at Hannah's new home and begs her to let her into her new life. Marnie's wild-eyed pitch is that all of Hannah's other friends have abandoned her and Marnie is the one who remains, so she wins the title of best friend and the dubious honor of being a stand-in parent. So Hannah lets her stay.

We flash-forward five months. At some point along the way Hannah popped out baby Grover—just like Paul-Louis wanted—but she's having trouble breastfeeding, because the baby's not latching on. And that's not Hannah's only problem. Marnie's still living with her, impeccably dressed in flowing skirts and feeding her New Age-y baby rearing nonsense while Hannah's sweaty, sore and still bleeding. "Your desire to be part of this is starting to feel really perverse," Hannah tells Marnie while Marnie reads her breast-feeding tips.

Then again, it doesn't look like Marnie's having too much fun with Hannah and Grover, either. She suggests she take a night off to go by herself to a local wine bar, and Hannah snipes at her for trying to escape her and the baby, even just for a few hours. They have turned into a married couple, and are having all of the daily moments that come with that. Hannah isn't prepared to be a mother but neither is Marnie, and it seems, shockingly, that neither of them expected this to be so hard. 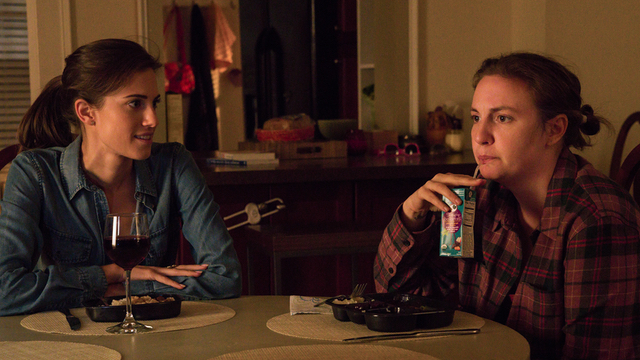 So Marnie calls in Loreen, because it's time for a Real Mom to show up. Hannah rails at Marnie for not being more supportive, but of course Hannah's too self-involved to see that Marnie, too, is struggling. Hannah also yells at her mother, complaining about how her body's destroyed, her son hates her and everything is terrible. But Loreen's not here to bail Hannah out. "You can't get your tuition refunded. You can't break the lease. You can't delete his text," she tells Hannah, re: having a baby. "You know who else is in emotional pain? Fucking everyone. For their whole lives." (For the record, Becky Ann Baker deserves an Emmy for this.)

Hannah storms out of the house in pregnancy jeans. Meanwhile, Marnie's upstairs acting out a FaceTime sex fantasy about airline pilots with a mysterious flame—Loreen walks in on her touching herself, and later, an embarrassed Marnie slinks into the kitchen to confront her, clad in pigtails and pajamas. But despite Marnie's childish getup, Loreen talks to her like she's an adult, because she is, and it turns out Marnie's virtual sex partner is a trainer from Weehawken. "Are you happy here?" Loreen asks, recognizing that Marnie's put her own life on hold to stay here with Hannah, and it's holding her back. Marnie's not happy, but at least with Hannah and Grover it's familiar and safe. The world out there is scary.

While this is going on, Hannah runs into a teenaged girl running through the neighborhood without pants and shoes. At first, Hannah thinks the girl has been attacked, and for the first time we see her disrobe in an effort to help another human out—after the girl puts her Hannah's jeans and shoes, Hannah offers to let the teen call her boyfriend from her house. Turns out, though, that the teen has simply run away from home because her mother was making her do her homework, and though Hannah was just equally whiny to her own mother, she lets the teen have it. "Do you think your mom wants to tell you to do her homework? No. But that’s her job," Hannah tells her, pointing out that mothers will love their children more than themselves, forever and always. Hannah then returns home and successfully nurses Grover, the show closes with a shot of her face, as she hums Tracy Chapman's "Fast Car" to her son over the credits. And that's it.

The best GIRLS episodes are usually the ones that take us out of the show's typical universe, like "The Panic in Central Park," "Tokyo," and "One Man's Trash." But this time, the departure from the GIRLS world is unsettling. This time, we're not going back, and not just because there will be no new episodes. Hannah can't ever go back to the GIRLS world, because Hannah's life is no longer about being a young, lost and self-involved Brooklynite. Though the things that have driven Hannah over the course of the show—the desire to find love, to find a fulfilling career, to find happiness—still matter to her, she's no longer allowed to be the center of her own world.

So the episode is disorienting, and it doesn't feel like GIRLS, which is perhaps disappointing to viewers who were looking forward to their one last chance to watch the show. But I liked it. The episode is strange because Hannah's world has become something she doesn't recognize, but life works like that sometimes. And that's how you grow up. Or so I hear.

And that's all, folks! Next week on GIRLS, there is nothing, because there is no GIRLS. The end.