Over the next couple of weeks Gothamist staffers will give you some suggestions on what you could get us (OR your loved ones) this holiday season. These are from the heart! Our warm, materialistic hearts. We really do like this stuff. 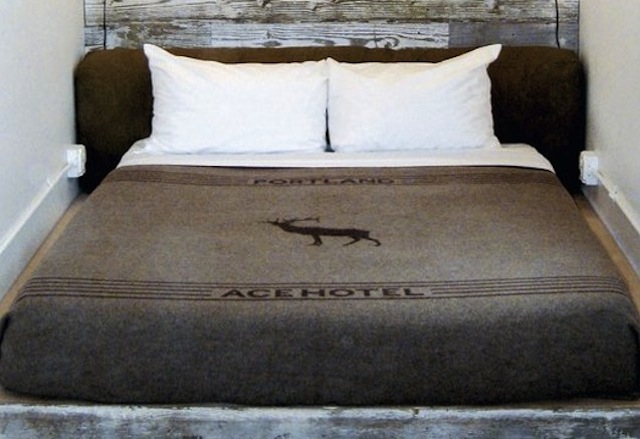 In 2007 I stayed at the Ace Hotel in Portland, Oregon. I walked in to the room, looked at the blanket, and thought, "That looks really scratchy and uncomfortable." BUT IT WASN'T. It was so soft, and warm, and I wanted to sleep with it every night for the rest of my life. But I had to check out a few days later, leaving it behind to keep the next guest warm. Time passed, seasons changed, I sighed every night pulling my $20 comforter up to my chin, and I still thought about the blanket every now and again. I'm not trying to be poetic, I really did think about it... and finally the hotel (at this point an expanding chain) was making it available on their online store. FOR $360. I put it on my Amazon Wishlist that no one knows about years ago so I could keep an eye on the price, which would surely at some point drop... but it never has.

The woolen Pendleton blanket has a simple Elk silhouette in the middle of it, and it's perfect, and you should buy it for anyone you really love because it will bring them the lifetime of warmth and joy that I'll never know.

Similarly, but for even longer, I have pined after that zebra wallpaper that appeared in Royal Tenenbaums. (Ahem.) It is real, and it's really expensive ($149 per 5 yards), and I don't even own my own walls to put it on, but the heart wants what the heart wants. And my heart wants everything draped in Scalamandre. Luckily, they also offer accessories with the same print—those will set you back a lot less and also who wants to wallpaper anyway? There are pillows ($99+ each), a dog pillow ($300), an ottoman (for the quirky price of $473), a table runner ($295), an umbrella ($95), a scarf ($195) and a tote bag ($225). The scarf and the tote are the clear winners here.

For a gift in a more realistic price range, check out Greenmarket Bucks, which are vouchers that can be spent like cash at farmstands in almost all Greenmarkets around the city. And if you're going for a romantic vibe, may I suggest you deliver them in a bouquet of swiss chard and radishes?

#gift guide
#giftamist
#gifts
#gothamist gift guide
#pendleton
#scalamandre
#original
Do you know the scoop? Comment below or Send us a Tip