Gift-amist: All Holiday Gifts Are Evil Except for These Two

Over the next couple of weeks Gothamist staffers will give you some suggestions on gifts that you could get us (OR your loved ones) this holiday season. These are from the heart! Our warm, materialistic hearts. We really do like this stuff. Today's gifter: Publisher Jake Dobkin.

I am not a materialist. I don't own much, but I often feel guilty about having so much more than most people on the planet. This is primarily for three reasons. First, as I may have mentioned previously, I was raised by Maoists in Park Slope in the '80s who believed that the mass media inspires pointless consumption as a tool to keep the working man down. Second, I live in a one-bedroom with my wife, two kids, and a very demanding cat. There is simply no room for anything besides kid toys and cat furniture. Third, the Buddhist stuff I read is always saying that the consuming mind is unzen, and that consumption is something that we use to distract ourselves from a full experience of the real.

These beliefs make me insufferable around the holidays! For several years I've been forcing my family to donate the money they'd spend on holiday gifts for me to various charities, like Amnesty International. But often they wouldn't listen and would just get me a sweater or something. So for my own part, I made a tradition of updating my own charitable giving every year around this time, which I track in a spreadsheet on Google Docs. Right now I'm giving monthly donations to The Brain and Behavior Foundation, The Coalition for the Homeless, City Harvest, Greenpeace, Partners in Health, JStreet, the Electronic Freedom Foundation, Transportation Alternatives, Channel 13, National Geographic, and Wikipedia. These are all well-run not-for-profits: I've looked them up on Charity Navigator, they all have high donor efficiency ratios and reasonably low executive salaries (under $250K per year, except for the Public Media Companies, which annoyingly pay a lot more.)

But I didn't come here to talk to you today about charity. I came to talk to you about hoverboards. You see, though I have every material thing that I need to be happy (food and water, shelter, clothing, and access to the internet), I do not have the one thing that I need to skate through the air, which, like most men in their 30s and 40s, I have dreamed of since seeing Michael J. Fox's hit movie Back to the Future 2 in 1989. 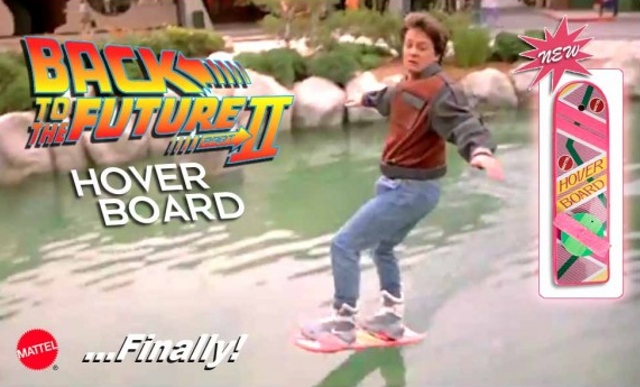 If and when someone solves the hoverboard problem, I will put aside my hostility towards consumption and purchase one. Until then, I often spend time on Kickstarter looking for Hoverboard equivalents, or technology that is moving in the direction of hoverboarding. Currently, the closest thing is the electric skateboard. It's a poor replacement: it runs on the ground, requires batteries which compromise the look and feel of the board, and the technology probably isn't up to tackling the challenges of skating uphill in New York weather.

But still, if I you put a gun to my head and said Jake, you must choose a gift for personal consumption or we'll shoot you, I'd probably pick either the forthcoming Boosted Board (an eye-popping $1,300 plus shipping and tax, but based on the very carvy Loaded Vanguard, which I've enjoyed riding in the past) or the behemoth Z-Board ($649-1199, about 30 pounds, but with a cool weight sensing technology that helps you steer.) I am hopeful that as the technology improves, these boards will get lighter and much cheaper, and begin paving the way towards true hovering in the future.

My anti-materialist beliefs also make me a pretty bad gift-giver, so I subcontract almost all of that work to my wife, who is very thoughtful about picking out things the recipient will enjoy. But I do keep an eye out for one very special category of gift, which is potential tools for my friends who make graffiti and other public street art. This is usually new technology that they could use to paint higher or differently. Last year I was very interested in Drones, because I thought it might be cool to use them to paint on really high walls. But I couldn't figure out how to connect a spray can to the drone in a way that would give the painter real control and not make a huge mess, so I abandoned the project (if you're interested, the DJI Phantom seemed like the best value when I was researching).

But this year I'm onto a new type of graffiti tool, which I think could be even more dope. It's the DIWire from Pensa, currently funding on Kickstarter. It's a wire-bender that allows you to draw curves, save them as an SVG file, and then print the curve out in wire. By soldering a bunch of these wires together you can make very cool 3D sculptures, which I think could be the basis of futuristic street art, especially if you covered the wire with some canvas or other fabric. Prices start at $2,500, which lets you bend two types of wire. And according to their video, this machine is good for more than graffiti: designers can use it for prototyping, so if you're into that, consider buying one!

In conclusion, buy nothing, but if you must buy, buy hoverboards or tools for making graffiti. Thank you!

N.B.: According to Jewish thought it's more charitable to give anonymously than to tell people about your giving. The reason I mentioned the charities I support above is not to raise myself in your esteem, but to encourage you to give to them: click on the links!

#gift guide
#giftamist
#gifts
#gothamist gift guide
#holidays
#original
Do you know the scoop? Comment below or Send us a Tip