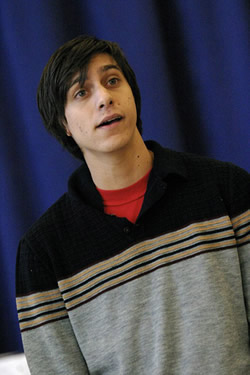 19-year-old Gideon Glick may still walk and talk like an ordinary young adult, but the past few years for the Philadelphia-bred actor have been quite extraordinary. An openly gay adolescent since seventh grade, Glick was catapulted to the top of the New York theatrical mountain last year through his portrayal of a young man discovering his homosexuality in the Broadway hit Spring Awakening. (The sexually-charged musical was adapted from the controversial 1891 play by Frank Wedekind.) Glick left the show two months ago and is now back onstage in Speech and Debate, a black comedy by Stephen Karam that opened last night at Roundabout Theatre Company’s new 65-seat black box theater, which is intended to be a “breeding ground” for emerging artists. Writing for the Times, Caryn James marvelled at "how funny and cliché-free this brilliantly performed little show is." All tickets to Speech and Debate cost $20.

So what is Speech and Debate about? Speech and Debate is about three misfits who become united by a sex scandal in their school, and in doing so come to terms with themselves and are forced to relate to each other.

What is your character’s role in the story? My character is an openly gay senior who moved from Portland, Oregon, a much more liberal town, to Salem, Oregon, where the play takes place. It’s his last year of High School and he really doesn’t like Salem because it’s the reverse of his liberal background. Then he gets swept into a sex scandal.

What interested you most about doing Speech and Debate? The characters are very complex and really interesting. There are a lot of layers to the characters; so as an actor to do a character like that is very challenging, and to play off other multi-layered characters is equally challenging and exciting. And these characters are not necessarily saying what they really mean, they all have dirt on each other and are manipulating each other. It’s an interesting dynamic that’s really fun and challenging to play.

Did it give you pause as a gay person to take on another role where you were playing a gay character? What do you mean, “Did it give me pause?”

It seems like most actors try to play as wide a variety of roles as possible and I’m wondering if you were at all concerned about starting to get typecast as a gay character. Well, that’s the thing. People seem to have this idea about a gay character being a typecast. For me it’s not like that; every human being is different, regardless of sexuality. My aim and goal is to play characters that are interesting and this character is interesting. To an extent, I could say, “Oh, I don’t want to play gay characters for the rest of my life!” But as long as the characters I’m playing are interesting and different from each other I’m fine with it; the sexuality is irrelevant.

I agree; it’s just that we’ve all heard rumors about movie actors who are secretly gay but they don’t want it to come out because it would limit the roles they’d get. Is that something that you consider? I mean, it’s always in the back of my mind to a certain extent but I came out at such a young age that… If people keep doing that [with their careers] there’s going to be no chance for change. We’re going to be stuck in the same cycle and I would love that cycle to change. It would make life a whole lot easier; I feel like there’s so much unnecessary tension in playing a quote/unquote gay character. I just think it’s ridiculous, you know? Playing a gay character, playing a straight character, they’re all just people. There should be no distinction and I think people should stop creating the distinction, you know? It leads to more homophobia in the world.

You’re right, I think that’s very perceptive. I just ask because I know the character is gay and you’re gay. But if you were a straight actor playing a straight character I never would have asked if you were concerned about only getting “straight” roles. Yeah, you know it’s a weird line that gets crossed. I guess at this point it’s natural but I wish it weren’t natural to go that way, you know.

Well, this all sort of came to light because you catapulted to a much higher profile with Spring Awakening, which had a huge following, especially in the gay community. Was it overwhelming for you to be suddenly thrust into the spotlight as an openly gay actor? What I liked about Spring Awakening is that it’s about kids’ sexual awakenings and what I enjoyed so much is that the quote/unquote gay scene wasn’t about coming out or admitting I’m gay, it was more about a boy falling in love – and it just happened to be with another boy. I just liked that it wasn’t about the kids being gay, it was about a kid falling in love. I think that’s what appealed to me so much because that’s what I went through in a small microcosm. And being an openly gay person, especially in the media, is something that I hope will encourage other people to just not care. I never cared and I never got why other people cared. And if it costs me something it’ll cost me something but I’d rather look back on my life and say I was happy with who I am, you know?

Yeah. Was it fun for you, on a personal level, to be 18 and in a huge hit show with a gay following, going out in New York and socializing? I don’t know about the gay following – it wasn’t ever really relevant to me. It was being in this big show and in unknown territory. For me it was my first year living away from home. I was going to go to college that year but instead I deferred. So my first year of independence was on the back of this incredible experience. It was crazy! As far as the gay aspect of it, Stephen Spinella was the elder man in the show; he was Pryor in Angels in America. And I remember when I watched the HBO film adaptation I was just dumbfounded at what art can be and do. So to work with someone who originated that role was awesome. We formed a wonderful and strong bond and he took me around. It was very fun to be in that culture.

And you left Spring Awakening in August, right? Yes.

Why did you leave? Well, I got the part for the new play and I’m also going to school right now at NYU.

But you’re not in the theater program, right? No, I’m not. I think I’m going to be a history major, a lit major or religion major. I don’t know yet. But yeah, in August I left, about a week before orientation began for school. And then rehearsal started for Speech and Debate.

You mentioned in an interview that your greatest indulgence is bad TV. What bad programming have you been indulging in lately? America’s Next Top Model is disgustingly indulgent for me. Sometimes I watch Heroes but I don’t think this season is amounting to what the first season was. I love reality television. It’s just the easiest way for me to shut my mind off.

How do you get around town these days? Strictly subway.

What neighborhood do you live in? The financial district.

What’s your favorite restaurant at the moment? The meatloaf at The Eatery is possibly the best meatloaf I’ve ever had.

You’re not 21 yet but lets say – hypothetically – you had a fake ID; what New York bar or club would be your favorite? I don’t know, there’s this one bar I went to the other day. I forget what it’s called and I forget where it was but the entrance to it is all wood and there are no windows. I think it’s called like, ‘til Death or it has ‘death’ in the name. But it was just the most awesome bar. You can get these juleps there and I love whiskey and they had all these whiskey drinks and the ambience was so awesome! I really liked it there; I just wish I knew the name so I could tell you. [ED: It’s likely Gideon was referring to Death & Company.]