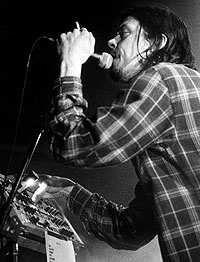 A tipster points out that after 90-minutes of playing Webster Hall last night, "Butthole SurferGibby Haynes got into a disagreement with the sound man over the volume of the monitor. The next thing we knew he was being escorted off the stage. We all stood around yelling obscenities at the management and throwing plastic cups at security. This lasted for about an hour until we were slowly corralled onto the street." The crowd eventually left what this tipster calls a "rotten facist venue." Whoa there, let's fill in the gaps.

Over at Brooklyn Vegan the reports are coming in that "Gibby walked over and punched him [the sound guy] and/or threw a bottle at him. Next thing you know security escorts Gibby off the stage mid-song." Meanwhile, TONY has culled all of the accounts, including their own, and report that Haynes spent much of the set "throwing silent hand gestures—and eventually a not-so-silent middle finger—toward the monitor engineer at the side of the stage, trying to get more sound. Finally, Haynes lurched over to the board and—depending on which blogger you trust—shoved the guy, threw a punch or tossed a beer bottle. From my perspective, Haynes shoved the guy, who took a swing back at him."

The ultimate inconclusive ending to everyone's story is that Haynes may or may not have been arrested, however the NYPD has just confirmed with us that no arrests were made at Webster Hall last night, this includes Gibby Haynes. So in the end, everyone got a 90-minute set and no one spent any time behind bars...though we're guessing Butthole Surfers won't be allowed to play at any more Bowery Presents venues in the near future, as the sound guy was allegedly one of their regulars.