Ghostbusters Get Their Game On, Again 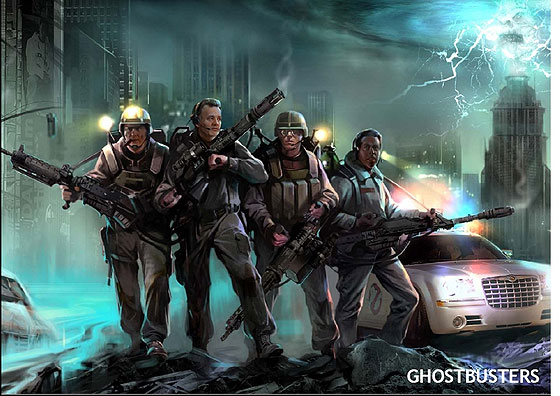 Ghostbusters has been in the form of a videogame ever since it hit the big screen in 1984, and since then it's been through many versions and platforms. Seems it has taken nearly 24 years to perfect it though, as it's just been announced the movie will haunt us til the end up time with a series of top-notch videogames to come.

First title in what the publisher hopes will be a series of Ghostbusters games is set for release in fall '08 from Vivendi's Sierra label.

All four members of the movie team -- Dan Aykroyd, Ernie Hudson, Bill Murray and Harold Ramis -- will be giving voice and likeness rights for the game. Some supporting castmembers have signed up as well, including William Atherton, Brian Doyle Murray and Annie Potts.

In addition, film scribes Aykroyd and Ramis will pen a story for the vidgame that takes place in the early '90s, after Ghostbusters II, during a new ghoul invasion of New York City.

Seems team Ghostbuster is being more cooperative than Coppola when The Godfather game was released. As for the 'busters, this version apparently has nothing to do with the Zootfly company that was attempting to make their own Ghostbusters game recently (the photo is from their prototype, and you can see video of it here). Vivendi (along with Sony PIctures) will be releasing it (serious gamers can check out more details in this upcoming issue of Game Informer), and they also have the franchise rights to Scarface, the Bourne Identity and rapper 50 Cent. When the company did a survey asking which movies should be turned into videogames, both Scarface and Ghostbusters were in the Top 5. What other New York-centric films should be made interactive? We're guessing I Am Legend and JJ Abrams untitled mystery movie will be shoe-ins for future games.