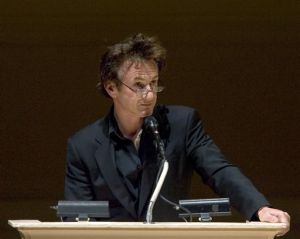 At a lively memorial for Norman Mailer held yesterday at Carnegie Hall, the esteemed author’s son claimed to channel his father’s spirit, a feat that turned into a tongue-in-cheek impersonation of Mailer that brought the house down. According to the Post, 42-year-old Stephen Mailer, one of nine Mailer children, stepped up to the podium, raised his arms like a revivalist, and shouted "Come on, old man, I'm all yours.”

He then fell to the ground as if struck by the spirit, staggered up, and began acting like his father. Clearing his throat before speaking, as was Mailer's custom, the son said in the gruff voice of his old man, “Can you hear me in the back? Hmm? Carnegie Hall? Well, why the f--k not? I think it's the perfect place for my memorial . . . I practiced my ass off.”

Hosted by Charlie Rose and attended by Sean Penn, Joan Didion, Don DeLillo, Tina Brown and others, the event was a star-studded tribute to the late author, who died last November at age 84. Penn said Mailer “had a deep and profound respect for what is earned.”

But the most insightful tributes came from Mailer’s offspring, who remembered him as a loving father determined to keep his sprawling family together through the turbulence of fame and multiple divorces. Stepson Matthew Mailer recalled being constantly asked as a child, “What’s that like, having Norman Mailer as a father?” He said, “It was like they were asking, ‘What’s it like being raised by wolves?’”

And according to the Times, John Buffalo Mailer said his father had written his own obituary in 1979: “The novelist’s death supposedly occurred sometime in the future after his 16th wedding and 15th divorce, when he owed millions of dollars in alimony, child support and back taxes. Included were fake quotes from the likes of Andy Warhol and Truman Capote. (‘He was so butch!’)"