Get Your Kicks At The Brooklyn Museum's Tribute To Sneaker Culture

It's been 31 years since the first Air Jordan hit the streets, nearly 100 years since the first Keds rolled off the assembly line, and decades longer since shoemakers first affixed rubber to the soles of shoes for lawn sports. The sneaker has come to be so standard that it's taken for granted. Kids these days are unlikely to know who Michael Jordan even is, and all but the most devout sneaker heads are unaware of their preferred fetish object's relationship to the Industrial Revolution.

Enter Sneaker Culture, the exhibit opening Friday at the Brooklyn Museum. The show is, as Obsessive Sneaker Disorder podcast host Dee Wells describes it, meant to appeal to an audience ranging from "a sneaker addict who could give you every description down to the thread count stitches on the Air Jordan 11 to an older person, say, whose grandkids are into sneakers, so they can understand the history, from the plimsolls all the way forward." Wells contributed shoes from his ample collection—as did Darryl McDaniels of Run DMC, and fellow New York sneaker booster Bobbito Garcia—and the exhibit draws from the vaults of Torronto's Bata Shoe Museum, all the big manufacturers, and what co-curator Lisa Small describes the "infiltration of high-end designers into the sneaker game," companies including Prada, Gucci, and Giuseppe Zanotti. 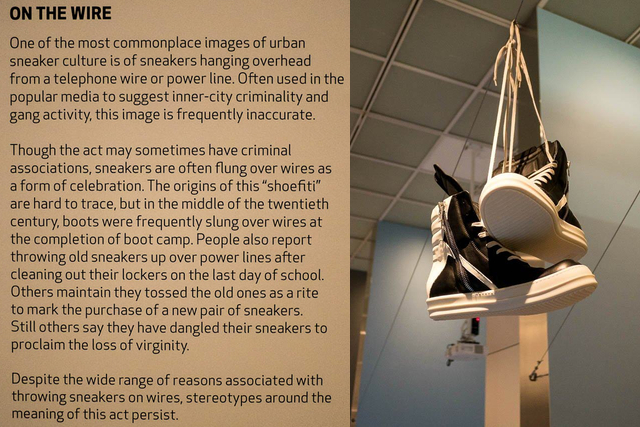 Small explained that hip hop (as seen in Run DMC's indelible "My Adidas") elevated the shoes from sports/kids-wear to universal fashion statement. The collector market that has taken hold since—sending lines wrapping around blocks, and online resale prices for Jordan or Yeezy 2s over $2,000—and the entry of European designers into the market is really sneakers coming "full circle," Small said. In the early 20th century, "rubber was very expensive," she explained. "If you needed sneakers, because you needed to play lawn tennis or croquet, that was really saying something about A: that you had leisure time to do that and B: that you had money to afford specialized shoes."

"It's a status symbol, let's be honest," he said, adding that shoes give him the opportunity to "show off a little bit" without wearing "50,000 gold chains and Cazal glasses like I did back in the '80s."

Wells marks moments in his life by pairs of shoes, and refers to the stories behind the objects as "kickstories." He said he was first mesmerized by footwear watching his parents play tennis as a five-year-old on the island St. John, where he grew up. His mom was wearing Adidas Rod Lavers, his dad Stan Smiths. It took begging to get his mom to agree to let him wear her shoes, and he "beat them so badly in school she didn't want them back." He saved up money from odd jobs to buy a pair of Puma Clydes at 10, visiting an aunt in Queens. From there, life has been a steady march of shoe moments that have allowed him to travel widely, lecturing at colleges, interviewing industry leaders, and seeking out the next pair.

He attributes a lot of his success to the internet, which for sneakers, he said has been "a gift and a curse."

"[The internet has] allowed me to be able to connect with people all over the world," he said. At the same time, where once Wells would comb the Yellow Pages for mom and pop shops when visiting a new town and cultivate industry sources with calendars of sneaker releases, "now all that information is available two, three months, a year in advance." The technological advances have also created a superheated resale market. As Wells's friend Pete Gibaldi, better known as Premium Pete, founder of SneakerTube.tv and co-host of The Combat Jack Show podcast, describes:

"When the releases come online there's people set up like boiler room with 7-10 computers and 7-10 credit cards...They just canceled a release last week because of bots."

The two also miss pre-internet sneaker folklore. Wells said some internet native sneaker fans "only know what they've read," but don't know, for instance, why there is a window on the Jordan 2010s ("A night of drinking Grey Goose that Jordan said he wanted to have a clear window," Wells said. "So blame it on the Goose, literally.") Periodic disclosures of sweatshop conditions at sneaker factories don't make a dent in buyer behavior—"the average consumer, the true sneaker head, that's the furthest thing from their mind," Wells said—but there are limits to even his admitted obsession. 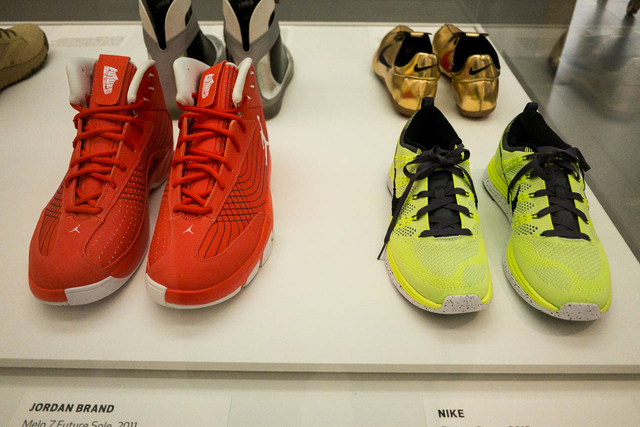 "At some point you go, 'If I can go three, four, five years without wearing the same sneaker twice...' It gets a little crazy," he said. Nowadays he said he most enjoys buying shoes as gifts for others.

The exhibit is the latest iteration of the Brooklyn Museum's tradition, forged under the leadership of retiring director Arnold Lehman beginning in the mid-1990s, of offering exhibits with a broad built-in audience. Past shows, including ones on hip-hop, graffiti, and Star Wars, prompted sniping by snooty executives at other New York museums. Small said she wasn't at the museum in those days, so she can't speak specifically to those exhibits, but she believes museums in general are beginning to view pop culture showcases differently.

"It's not about looking for a show that has mass appeal, it's about looking at a subject and investigating and presenting in a way that is scholarly and has a certain rigor," she said. "If it's popular and people are interested, that's great, too."

She noted that there would be some hypocrisy in fine-art curators poo-poohing an exhibit for being too consumerist.

"Are you going to argue that a Jeff Koons is also not a commodity?" she said. "There are people that spend millions and millions of dollars on these things."

On the sneaker head side, Gibaldi said he has been hearing from a lot of people concerned about the exhibit misrepresenting the subculture. They have nothing to worry about, he said.

"I'm so happy sneaker culture is represented in a museum," he said, "and really represented for people to learn about it...It's really like an aquarium, except full of soles."