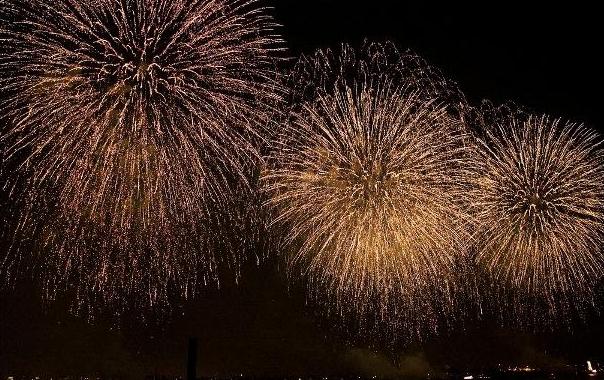 The 31st Annual Macy's 4th of July Fireworks extravaganza is just around the corner. This is the largest display in America and takes a year to plan. This year's show will stretch wider than usual in a "high definition" format, choreographed to the New York Pops (simulcast on 1010 WINS, TV broadcast on NBC). The Daily News has an interview with Gary Souza, fireworks designer for the event; he says, "We have a new orange that’s really awesome. It’s a golden-red color. We also have this silvery pixie dust that bursts into pink and chartreuse. And look for the aqua jellyfish during the 'Pirates of the Caribbean' song."

The NY Sun reports that this years display, which is always touted as having 55 times more fireworks than anyone else, will contain 40,000 shells. To give you some perspective, that's 1300 explosions in the first minute alone - the Sun reports that "during an average 20-minute fireworks show in America, only 500 shells are fired."

Traditionally, the best areas to view the fireworks are the FDR Drive from 14-42nd, Long Island City, the South Street Seaport, and the Brooklyn Promenade. An interesting note: The Macy's website shouts in capital letters that "BATTERY PARK IS NOT RECOMMENDED AS A VIEWING SITE FOR THE MACY'S 4TH OF JULY FIREWORKS" - because this year, unlike years past, there's no fireworks barge near Liberty Island. However, it turns out there's been some serious drama between NYC and NJ over fireworks, to the point where NJ officials were facing off against Macy's and the FDNY. Anyway, there will be Jersey City-sponsored fireworks over Liberty Island starting at 9PM.

The Macy's show starts at 9PM, but people start claiming areas to sit hours before. We've already mentioned the Williamsburg waterfront as a new option for Brooklynites. About has an informative list for planning your night around the explosions, and AMNY has ideas for July 4th meals. Roosevelt Island also has some seating available, but you have to pay for tickets.

So where will you watch the sky light up on Wednesday?

Photograph of last year's fireworks by ixtayul on Flickr