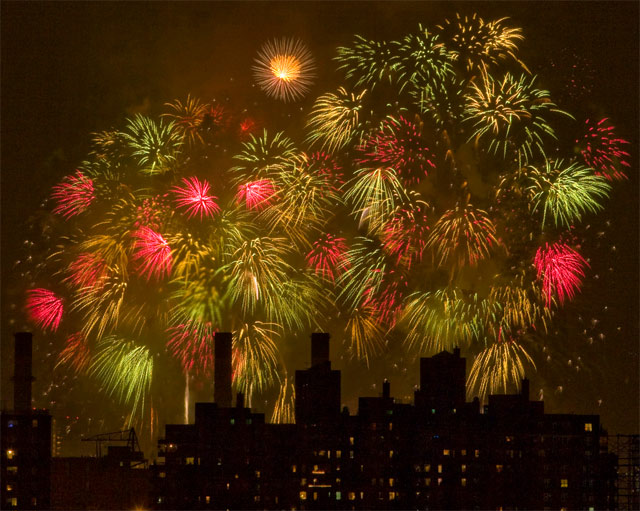 The annual Macy's 4th of July Fireworks extravaganza is the tremendous display that everyone looks forward to. With over 35,000 shells (which means an average of 1,100 shells per minute during the program), it's the largest fireworks display in America. 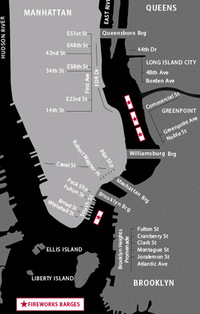 In fact, Macy's fireworks show producer Robin Hall told the Daily News that there will be six barges from which fireworks will be set off, "On each and every one of those barges, there are more fireworks than there are in the entire show on the Washington D.C., Mall."

The show starts at 9:25PM, but people start arriving hours earlier for better vantage points. The barges are set up in the East River (click on map at right to enlarge), and the best areas to view the fireworks are the FDR Drive from 14-42nd, Long Island City, the South Street Seaport, and the Brooklyn Promenade Four of the barges (two single, one double) are positioned further south this year, closer to the Williamsburg Bridge and Kent Avenue in Brooklyn, so keep that in mind (why? because NBC wants to show more of the lower Manhattan skyline; compare with last year's map). [Additional details about FDR closings and access here.]

This year's theme is "America Dances," with songs like "Tennessee Waltz," "Rock Around the Clock," and "Save the Last Dance for Me" and Hall promises "a lot of effects never seen before." Some of them include, per the News, "new parallel quad rings will be launched, transforming into sparkles, waterfalls and bees" and "new UFO shells" that climb all over the sky. But don't worry--the happy-face fireworks will be back.

Here are more tips from the Daily News and WCBS880, which also has some tips about other fireworks displays in the area. The program will be broadcast on NBC and if you're seeing them live, you can tune your radio into 1010WINS for the simulcast.