Get Ready For July 4th Fireworks Over The Hudson

Tomorrow night is the 33rd annual Macy’s 4th of July Fireworks. As we all know, the fireworks will take place over the Hudson River this year, to celebrate the 400th anniversary of the river's exploration by Henry Hudson. Expect a dazzling display of 45,000 shells (which will explode a rate of more than 1,500 per minute) from six barges, which is the most barges that Macy's has ever used. Fireworks designer Gary Souza told the Post that the Hudson "gives us a broader area to launch the fireworks from and makes the show that much more spectacular. It's one of the biggest and best shows we've ever put together." 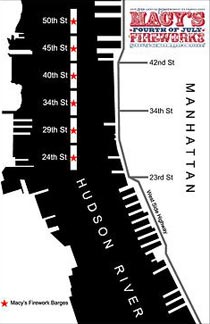 The Macy's 4th of July Fireworks, which were first held on the Hudson back in 1976, is set with an American River, and there will be some tie-ins with Dutch culture in the fireworks themselves. The fireworks are just one of the highlights of the city's and Netherlands' festivities Hudson's voyage all year long. Renée Jones-Bos, the Dutch Ambassador to the United States, told us, "The Netherlands and New York share a special bond that has been fortified over time. Our bond is recognized not only in the fireworks to be seen on the 4th of July, but also in the many ways the Dutch influence has permeated New York City. From Dutch words incorporated into New Yorkers' everyday language such as 'Yankees' and 'Breukelen', to the atmosphere of multiculturalism and tolerance the city is known for, to New York City's role as a capital of finance, the Netherlands and New York share a world of similarities."

According to Macy's, the best viewing spots along the Hudson (on the NYC side) are anywhere below 59th Street along 12th Avenue—but there are specific access points on 11th Avenue: 24th Street, 26th-30th Streets, 34th Street, 40th-44th Streets, 47th-52nd Streets, and 54th-57th Streets. There is very limited viewing north of 59th Street on the West Side. The fireworks begin at 9 p.m.; there's also a NBC broadcast and radio simulcast on 1010WINS.

#fireworks
#hudson river
#july 4
#macy's
#ny400
Do you know the scoop? Comment below or Send us a Tip