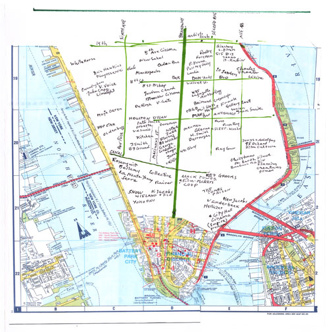 The New Museum wants us all to get lost. Well, not really, but they did recently ask 21 artists worldwide to get their image of New York down on paper for their exhibit, Get Lost.

The personal viewpoints and maps of downtown New York cover territory that is both real and imagined (including fictional landscapes, utopian visions, private memories, and obsessive instructions), so if you follow one - you'd surely get lost (but in an artsy vision quest sort of way). With instructions on how to ride the bus ("go past the NYU dorm where 'Felicity' lived..."), a map of noise sanctuaries and the fastest route from Bowery to a casino in Vegas...there are plenty of ways to get lost in this city with these little pieces of art-cartography.

Pictured is Jonas Mekas' My Downtown (see enlarged image here). A "map of memories, listing the places where his friends in the Sixties used to hang out. By carefully reading his notes, one will find out where William Burroughs used to sleep, where Warhol's Empire was premiered and where Bob Dylan used to stay when in town. Mekas has also changed the name of Wooster Street into 'Maciunas Street' in honor of the Fluxus pioneer that used to live there."

Free copies of Get Lost are available in select establishments (which will undoubtedly lead to at least one group of tourists actually getting lost), including Freeman's, Babeland, The Bowery Hotel, Two Boots and the Bedford Cheese Shop. Or just head over to the New Museum Store at 556 West 22nd Street to pick one up.