Some deep South Brooklyn residents are all riled up about a kid-friendly reading series that will bring drag queens to a local public library this afternoon, and are now vowing to protest if the event is allowed to go forward.

The program, which coincides with the start of LGBTQ Pride Month, is hosted by the Drag Queen Story Hour, an international organization that aims to "give kids glamorous, positive, and unabashedly queer role models" by bringing drag queens to local community spaces. The popular story hours have been held regularly across New York City since 2016, though this is the first one at the Gerritsen Beach branch of the Brooklyn Public Library.

As occasionally happens in other cities, the idea of drag queens reading to children has upset some local residents, who wasted no time stooping to reactionary fear-mongering. The Brooklyn Daily Eagle reports that a flyer circulated throughout Gerritsen Beach and on a handful of neighborhood Facebook groups is calling on the community to "make clear that we won't allow this madness in our library or school." It goes on to warn residents of a "tax payer funded attack on our babies" that could "GROOM children into the Transgender lifestyle." 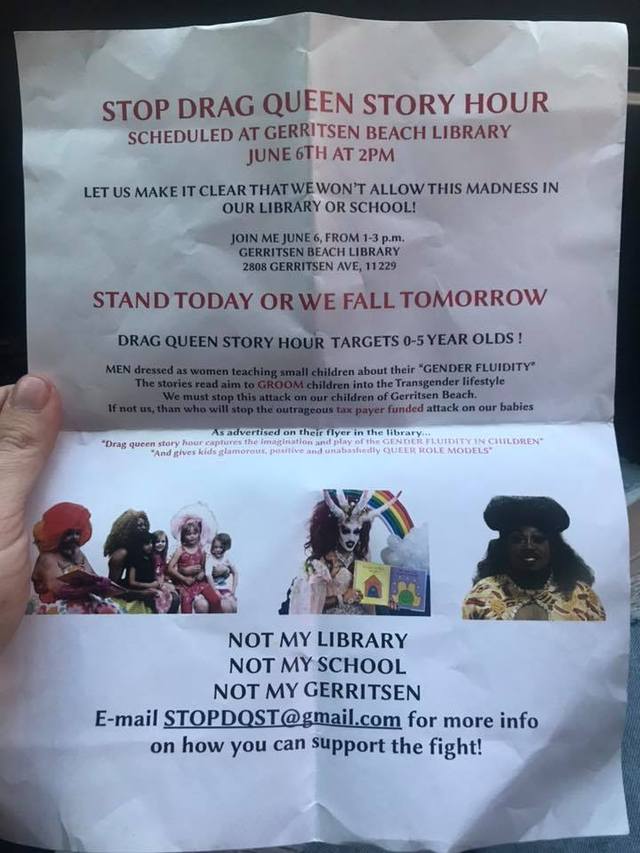 A photo of the flyer posted online (via Facebook)

The Eagle spoke with the man behind the flyers, who declined to give his last name for some reason. "Tag" told the outlet that his problem is not with drag queens, but with the "indoctrination of these children." A friend of Tag's, Rick Knight, also told the paper that the library should not be "promoting gender dysphoria," and wondered whether they'd be allowed to host a conservative story hour. (Knight added that he is "pro-gay marriage.")

A protest is scheduled to take place outside of the library from 1 p.m. to 3 p.m. today, during the story hour. One Brooklyn resident told the Eagle she was looking forward to attending, but is now "afraid protesters will end up being violent.”

Nick Higgins, Chief Librarian for Brooklyn Public Library, said in a statement to Gothamist that the event will go forward, regardless of the local backlash. "The response to Drag Queen Story Hour has been overwhelmingly positive, drawing large and supportive crowds at branches throughout the borough," he said. "Children love the bright colors, songs and stories. The Library is proud to present Drag Queen Story Hour along with nearly 11,000 other free programs each year to promote early literacy."

A spokesperson for Drag Queen Story Hour added: "LGBTQ children need role models, and all children should learn to embrace gender diversity and learn empathy. Ultimately, parents and caregivers decide whether to attend a particular story hour. If Drag Queen Story Hour is not for your family, the library has many other great programs."