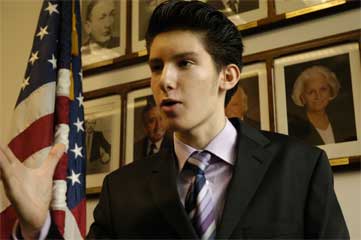 George Zisiadis is currently attending Harvard, but the new film Frontrunners documents his time as Stuyvesant High School, and more specifically, his time campaigning to be president of the student council. The film is akin to Election, but true-to-life and filled with competitive New York teens, all attending one of the most competitive high schools in America. Currently at the Film Forum through the 28th, we highly recommend checking it out. George recently told us his thoughts about the current election, and how he would fix New York.

How did you go about running your campaign? Putting the biggest emphasis on reaching out to traditionally apathetic student blocks that otherwise wouldn't have felt compelled to vote. But in general, 90% of the campaign isn't the campaign itself. How you treat people today goes a long way towards how they vote tomorrow.

Even though they can't vote, is there a certain Presidential nominee that you think Stuyvesant HS students are supporting? Stuy tends to be pretty progressive. Obama.

Have you considered running at Harvard? No. There are too many other fun things to do.

What was the idea behind the Lounge, and what goes on when it's open? It's not described, only experienced. 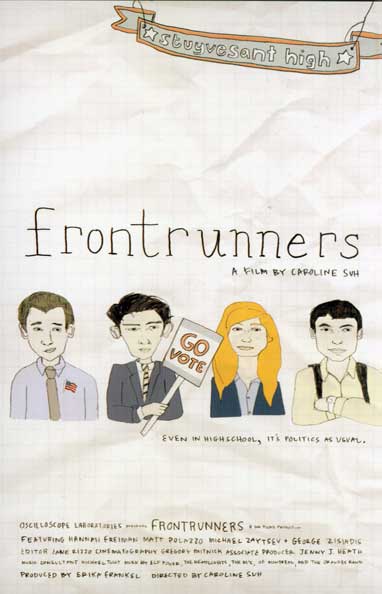 Did you think Frontrunners showed an accurate portrayal of yourself and the high school? Yes, everything was unscripted and what you see is what was really happening. There is no real spinning that you might expect from MTV. I'm still the same person then and now. There are many more unique aspects of Stuy that couldn't come across in such a limited time. but whatever was shown was authentic.

Please share your strangest "only in New York" story. I was randomly standing on the corner of 46th st and 10th ave at midnight on a Saturday last December waiting to cross the street. And then Rod Stewart comes stumbling out of nowhere right in front of me and off into the distance as everyone around me cheers.

Which New Yorker do you most admire? Still looking.

Given the opportunity, how would you change New York?
- Congestion Pricing
- More incorporation of pedestrian and bike friendly design practices into streetscapes.
- Not limiting super cool music acts to the 21+ crowd.
- A respectable, specifically on time, subway system worthy of our city.
- A much nicer train and bus terminal worthy of our city(aka not Penn Station or Port Authority)
- Not allowing building owners to erect scaffolding and leave it there forever.
- Free guacamole made available to every citizen on the third Monday of every month.

Best cheap eat in the city. New York City, cheap? It's not cheap, but Rice to Riches in Soho is a fun snack spot.

#Frontrunners
#George Zisiadis
#interview
#stuyvesant high school
Do you know the scoop? Send us a Tip
A new Gothamist is coming! We’ve moved comments over to our beta site. Click here to join the conversation and get a preview of our new website.