Phillippe Petit wasn't the only daredevil back in '70s that used the World Trade Center as a stage. Today marks the anniversary of George Willig's climb up 2 WTC, the south tower, in 1977. Also known as "the human fly" or "the spiderman," it took the mountain-climber and Queens resident about 3.5 hours to scale the building. Sport Illustrated wrote a story about the climb shortly after it took place, which you can still read here. In it Willig's brother notes that the Port Authority cops asked him "'Is George sane? Is he doing this for any political purposes? Is he going to wave signs or something? Is he doing it for a commercial reason?' I told them he was doing it for his own satisfaction, no other reason, and that he was as sane as I was, which I think confused them." His punishment? New York City Mayor Abraham Beame fined him $1.10, one cent for each of the skyscraper's 110 stories. Allegedly he signed his name on a piece of metal on the observation deck which was still visible until its destruction in 2001. Sadly, there doesn't appear to be much footage, aside from this 12-second clip (larger image of his climb after the jump). 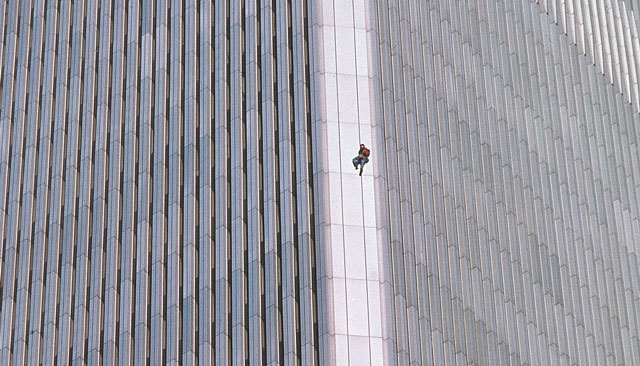 #1977
#climb
#george willig
#south tower
#world trade center
#wtc
Do you know the scoop? Comment below or Send us a Tip