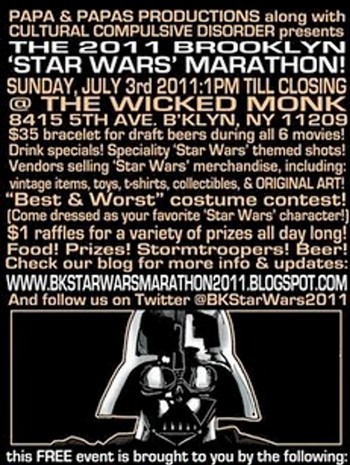 George Lucas took on an unexpected, unassuming foe last weekend: no, not the dastardly battle droids—think more like a group of Bay Ridge Star Wars fans who were planning a movie marathon at a local bar.

The bar Wicked Monk had planned to screen all six Star Wars movies in a 13-hour marathon last Sunday that also included a costume contest and space-themed drink specials. But Lucas's camp somehow found out about the event and promptly ordered marathon organizers to cease and desist, saying they couldn't screen the saga because they were charging admission (though fliers said that the only fee was for drinks) and using the Star Wars logo without permission. “God forbid a few people in Brooklyn want to get together and watch the movies—that we paid for!” said organizer Mike DeVito, adding “I think [Lucas] has become worse than [Darth Vader]. Darth Vader is at least redeemable.”

Lucas has always had a conflicted relationship with his fans, an issue filmmaker Alexandre Phillipe explored in The People vs. George Lucas. In the meantime, DeVito declared that he's had it with Lucas, saying “I’ve always had such blind loyalty. That’s over.”

#bay ridge
#brooklyn
#cease and desist
#film
#george lucas
#monk bar
#star wars
Do you know the scoop? Comment below or Send us a Tip
A new Gothamist is coming! We’ve moved comments over to our beta site. Click here to join the conversation and get a preview of our new website.