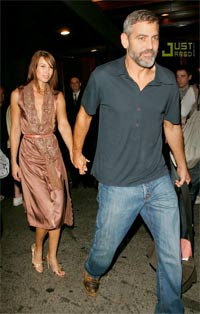 Rugged celebrity George Clooney and his girlfriend were injured when their motorcycle got into an accident with a car in Weehawken, NJ yesterday afternoon. Clooney, whose has been filming the Coen Brothers film Burn After Reading in New York and New Jersey, has a hairline fracture of a rib and road rash while Sarah Larson has broken some of her toes. Both were wearing helmets.

Clooney's spokesman Stan Rosenfeld said, "George said he was driving to the right of a car when the other driver signaled for a left turn. All of a sudden, the driver changed his mind, turned right, and ran into George."

Albert Sciancalepore, the driver whose car hit Clooney, differed with that account, and called WNBC to tell his side, "It was definitely his fault. He was behind me making a right turn in a single lane and he tried to cut me off from my right side." Weehawken police sergeant Sean Kelly said, "It's a he-said, she-said right now, but you can't pass on the right in Weehawken or anywhere in Jersey." Clooney did not receive a citation.

A witness David Sciumbata told the Daily News, "I thought he looked like George Clooney and the girl was very pretty, so it figured...She seemed really hurt. She had a cut on her face." And Sciumbata's friend, Jerry Zaslavsky, lives near the accident and offered to house the rented Harley-Davidson until the star could pick it up.

Clooney and Larson were treated at Palisades Medical Center. After being released, they headed back to Manhattan, where Clooney still plans to attend the New York premiere of his NYC-set lawyer drama Michael Clayton on Monday.