Last week, an eagle-eyed Game Of Thrones fan was able to quickly find a hidden Iron Throne that HBO had planted in the battery at Fort Totten Park as part of a world-wide GOT hunt to promote the final season. HBO then decided to leave the throne there over the weekend and allow other fans to visit it and get that coveted Instagram throne pic. There was just one problem: too many people showed up, and there ended up being over five hour long lines to get a turn to sit on it, which led to HBO and the Parks Department turning people away after just a few hours. 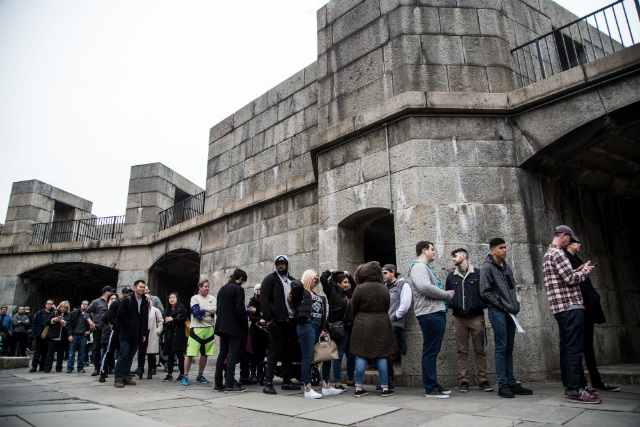 The line for the Iron Throne (ALBA VIGARAY/EPA-EFE/Shutterstock)

Queens resident Melanie Joaquín quickly located the Iron Throne at Fort Totten Park on Thursday morning soon after HBO tweeted out a cryptic photo of it. "I snuck in here through a hole, and the other ladies were looking at me like 'WTF,' but I don't care, I wanted this throne, so I did it," she told a cameraperson stationed at the throne. Then on Friday, HBO announced that the throne would be open to the public from 7 a.m. to 7 p.m. until April 1st.

They apparently underestimated just how many people would be interested in coming, because by Saturday, there were insane wait times to get a photo. "I've been standing in Fort Totten since 745 to sit on a chair," tweeted one fan several hours later.

Welp, me and my dude @briscoevision tried to get to the hidden Throne left by @GameOfThrones @HBO for the fan base but the wait is 3-5 hours! Can’t stay that long 😒. We left as soon as #FortTotten closed the gate. Have to wait till April 14. 🤷🏽‍♂️😆 #GOT pic.twitter.com/CNGcj6ezFJ

In search of #gameofthrones #forttotten #queens

They put up signs Sunday saying they had to shut down the lines because of the huge turnout. "The most unorganized, unprofessional least thought out situation. Good job @hbo and @nycparks," one person wrote on Instagram.

NYC Parks are saying “@HBO has cancelled the throne event, you will not see the chair” 🙁 Can the throne just permanently stay at #FortTotten? @NYCParks #GameOfThrones#ThroneOfTheCrypt #ForTheThrone pic.twitter.com/HCnSoj3udR

People who had come from far away were understandably pissed:

My friends and I drove 6 HOURS leaving our house at 345am to get to see the throne and its shut down! Northern VT to Queens NY just to hear come back tomorrow. Wtf!! We got there at 945am to be turned away and watch other people get to leave and come back as long as they left I.D

I got here at 7, when the park opened and people were already here and I was 10 people away from going inside when they closed it! Maybe you should extend the time, it’s also crazy they close it at 7pm. Unfair for fans who came here to just be shut out like that. pic.twitter.com/59KGk854KR

PLEASE extend this event through next weekend!! We all came in cosplay #FORTHETHRONE and drove 2 hours only to be turned away at 11am. Deeply, deeply dissapointing.

"There was a 7-hour wait time yesterday and to ensure that everyone in line was able to make it to the throne, we shut down the line,” an HBO rep told the Daily News about why they shut down the line by 1:30 p.m. Monday, the final day the throne was open to the public. They added that there were no plans to extend the event for another weekend as of now.

If you didn't get a chance to take that coveted throne selfie (you can check out people who did here), you can always head over to 30 Rock, where they are setting up a GIANT Iron Throne for the GOT premiere that is happening this week.

#fort totten park
#game of thrones
#HBO
#iron throne
#lines
#queens
#television
#the tyranny of lines
#tv
Do you know the scoop? Comment below or Send us a Tip