Yesterday it was announced that Galapagos Art Space, which has been a New York City institution for nearly twenty years (first in Williamsburg, then in DUMBO), would be moving to Detroit. We asked director Robert Elmes to explain the decision to make such a drastic move in more detail, and here's what he told us over email: 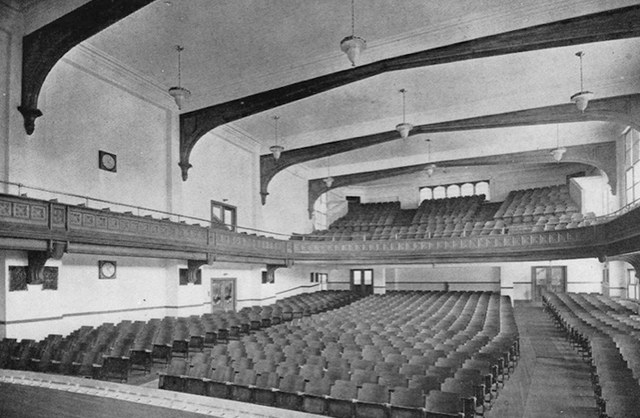 An old photo shows the inside of one of Galapagos's new buildings in Detroit.

"What drew us to Detroit is the realization that cities need three ingredients to attract or retain artists: time, space, and other artists. In NYC artists have one foot in a full time career and one foot in what is now a dream to find an affordable studio and to move their sculpture studio out of their kitchen because they have an ultimatum from three of their four roommates. Detroit has space in abundance and as a factor of that, time. What it’s gaining is artists, and what artists are finding in Detroit is opportunity, and other early adopters making community and working on their particular dream.

In the end only one thing matters—good artists and the best young thinkers follow ideas and ideas flourish only when there is opportunity to realize them.

We’ve been going to shows, watching work, and learning about Detroit. Now that we’ve announced we’re going to hold an open house and barbecue in the spring to try to meet as many people as we can and explain what it is that we specialize in working on.

Move to Detroit. In Detroit you can buy a bank on a corner for $60,000. In fact, you have a choice so you can find the one that suits you best. I’m serious, there’s that much opportunity in Detroit—it’s unreal. I tried for years to find an affordable space in Brooklyn and couldn’t find it. Galapagos cannot pay $70 to $100 a square foot and ever hope to influence or contribute to a young artists career, and they can’t afford to continue being in New York City either. I think we’re all moving to Detroit."

As with what happened between Galapagos and Two Trees, the owner of the Brooklyn space, it seems like a clean break with no hard feelings. Elmes told us, "We just couldn’t come together on a price that we could both be comfortable with. What they did do over the years was significant and I’m sure that whatever plans they have for the building will be terrific."

In addition to hosting arts events, Galapagos's DUMBO location was a popular wedding venue, and weddings were booked at the location through next year. But Elmes insists this isn't going to be another ReBar situation; he tells us he's refunding the money for all cancelled weddings and events, and says, "Our wedding planner is going to work with couples to find new venues."

He's not sure what they'll do with the space once he's vacated, but Two Trees assured us it would remain an arts space, saying, "We will keep 16 Main as a building for the arts. Two Trees has long supported and promoted the art and cultural community in DUMBO with free and below market rents and we will continue to do so." Sure would make a nice looking Anthropologie though, eh?

#detroit
#galapagos
#robert elmes
#original
Do you know the scoop? Comment below or Send us a Tip