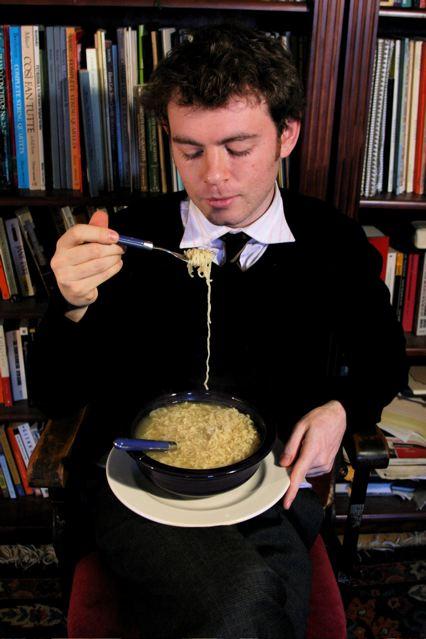 We first saw Gabriel Kahane live after booking him at our CMJ Gothamist House show earlier this year. He sat behind a keyboard, rather than his typical piano, and charmed the room with unique pop sentiments (and a song with lyrics taken from Craigslist missed connections). NYMag recently wondered how the classically trained musician, and his troupe of like-minded friends, are remaking the pop genre. With a just-released self-titled debut now under his belt (expect "string quartets juxtaposed with strummy strum folk songs, brass chorales right beside jangly piano pop"), Kahane seems to be on pace to takeover eardrums and iPods throughout the world. He plays (Le) Poisson Rouge tonight before finishing up the rest of his tour.

When did you start playing piano and writing music? I played piano sporadically as a child, stealing into my dad's studio when he wasn't practicing to pick out themes from the pieces he was working on, taking the occasional lesson without bothering to practice, and often banging out the same super honky twelve bar blues in C major over and over and over again.

It wasn't until I had completed major childhood detours as a little-league shortstop, tiny opera singer, and nationally ranked junior chess champion that I found my way back to the piano, enrolling at the New England Conservatory of Music to study jazz at eighteen. I didn't like it particularly, and transferred to Brown University, where a series of accidents led me to start writing songs. The moment that I moved to New York (right after college) was really the moment when I started to think of myself as a songwriter, and by extension, a composer.

Who are some of your major influences? A lot of the influences that pop up in my work are literary rather than explicitly musical. Perhaps because I don't get outside enough but tend to read a lot, it's easier for me to write songs based on books that I've read rather than actually have experiences in the tactile world. Okay, okay, I'm being a little glib.

I think artists' reluctance to address this question head-on has to do with a misreading of the notion of individualism-- there's a fear that if you talk about other artists as they relate to your work, you'll be dismissed as derivative. But what gets lost in that is the beauty and joy of intertextuality, the practice of one text responding to or incorporating another text. It's entirely possible to respond to someone else's work in your own without being a slave to imitation, and I think that intertextuality is one of the only ways that art makes a coherent metanarrative over time.

All those caveats aside, here are some things I've responded to in one way or another on my debut record that just came out: Claire Messud's novel The Emperor's Children, Sherill Tippins' gorgeous book February House, a certain song on The Boxer by The National, Brooklyn architecture, a chorale by Bach, one of Gyorgi Ligeti's piano etudes, and I think there's a vague allusion to an Elliott Smith song as well. You have twisted my arm and beaten it out of me. Can I PLEASE have those cupcakes now, PLEASE?

You've done some music direction for plays here in New York, have you enjoyed those experiences? Erm.... musical direction is a pretty thankless job. But doing Hell House at St. Ann's Warehouse was a thrillling experience. We very reverentially recreated an evangelical hell house (look that shit up on wikipedia if you, gentle reader, don't know what I'm talking about) and I served as the curator of the "hoe-down room", in which we dressed in white and sang CCM songs like "Open the Eyes of My Heart, Lord" and "My Father's House". There was also an original song that I wrote with my friend James Rickman called "What about Sunday" which included the lyric: It used to be about Jesus / but now it's just about Brunch / and that's why I say / What about Sunday?

Would you say the piano is the most difficult instrument to own while living in New York? I mean, it's definitely made me think twice about moving house. I've only had two apartments in New York over almost six years, and I was so nervous about these enormous Russian dudes moving my Steinway up to a third-floor walk-up in Brooklyn that I got completely shitfaced on Ouzo at 10am with this Palestinian guy who I met on the street outside my building.

I've actually never had a complaint about my piano-playing in the four-and-a-half years I've lived in my current apartment, though that might have something to do with the fact that my downstairs neighbors are constantly screaming "SHUT THE FUCK UP" at each other at the top of their lungs-- I'm guessing the piano playing doesn't really phase them. Being a drummer would suck more, because no matter how good a drummer you are, no one's gonna want to hear you practice.

How long did it take you to filter through Craigslist to write your song? What was left on the cutting room floor? I didn't write any complete movements that I didn't end up using, but I probably combed through a hundred or more posts. In the final analysis, I was looking for things that were funny but whose humor was rooted in some kind of honesty or revelation about the human condition... things with pathos. There were things that had shock value but didn't seem that they would bear multiple listenings. The movements of the cycle are character studies, I think, and the posts I chose to set, however absurd, all seem to portray vivid characters.

What are you currently working on? Trying not to die of high cholesterol on tour. Also a musical commissioned by the Public Theater based on the aforementioned "February House", which is an exploration of an arts commune in Brooklyn Heights in 194-41 that played host to the likes of W.H. Auden, Carson McCullers, Benjamin Britten, Gypsy Rose Lee, and Jane and Paul Bowles, among others. They actually lived in the same house for almost a year, and drank copiously. There's also a little piano piece for my dad's recital at Lincoln Center in the spring.

What did you think of your recent Pitchfork review? A friend put it best-- "Pitchfork reviews an aesthetic, not music." My music is totally not of the Pitchfork aesthetic, and I don't begrudge them for reviewing it accordingly. The guy reviewing it had a set of criteria that I couldn't satisfy, and I'm fine with that. I write music that doesn't apologize for being emotionally direct, and while I'm always trying to make it more subtle, nothing will keep me from trying to give the listener an authentic emotional experience. The critic also weirdly seemed like a Karl Rove-style Republican, taking swipes not just at my music, but also at NPR, the New Yorker, and the Northeast in general. So I guess it was kind of an attack on all of us. Ha.

Please share your strangest "only in New York" story. I bought a blue Pan-Am messenger bag in Los Angeles and had just come back to New York. I was on the 2 train, and this strangely ageless man with a pocket protector and a lopingly effeminate lilt to his speech stepped on the train and started interrogating me about the bag loudly to the effect of, "Oooooh, Pan-Am!? Are they even still operational? I thought only Jewish ladies from Miami wore Pan-Am. Are you a Jewish lady from Miami?" As a septuagenarian gentile from Daytona Beach, I was pretty pissed off.

Which New Yorker do you most admire? My grandparents on the Upper East Side are pretty rad. They're like the lost couple from When Harry Met Sally. My grandmother and step-grandfather had only been in loveless marriages until they reconnected fourteen years ago, having initially met in the 40's at Columbia. Raymond has worked at the New York Review of Books for 44 of its 45 years, which I think is an incredible feat. He is the only person in the office who doesn't use a computer and takes all his calls on speakerphone, including those from his doctor. My grandmother Judith finally ditched WebTV for an iBook, and I think she deserves props for that.

Given the opportunity, how would you change New York? Oh God. Make me sound like a naive and idealist teenager, why don't you. The fact that New York is at once a first-world and thirld-world community is inescapable in our daily lives, and I'd like to see a more coordinated effort on the part of those of us who are in the former camp to make the city more just and liveable for the throngs of less fortunate New Yorkers.

What's your current soundtrack? Elvis Perkins' Ash Wednesday. Took me a while to realize how brilliant that record is.

Best cheap eat in the city. Vanessa's Dumpling House on Eldridge. The renovation kind of bums me out cause they had to raise prices a touch, but it's still a rad bang for your buck.

Best venue to see music. Zankel Hall at Carnegie is flexible and classy without being pretentious.