William McFarland, who pleaded guilty to fraud in connection with infamous festival disaster Fyre Fest, has been charged with perpetuating another fraud. According to the U.S. Attorney's office, while awaiting sentencing for the Fyre Fest scam, the 26-year-old was running an operation to offer fake tickets to elite events, like the Met Gala, Grammy Awards, Coachella, and Burning Man—and sending out solicitation emails to past Fyre Fest victims.

Earlier this year, McFarland admitted that he created fake documents to entice investors to put $26 million into his company and Fyre Fest itself. The April 2017 event had billed itself as a luxury experience, but when attendees got to the Bahamas, they found accommodations that were a far cry from what they paid for, as well as empty concierge stations, meager food, and cancelled flights, which effectively trapped them there for days.

Now, prosecutors say he had been running a new scam since late 2017 through March 2018. "In March of 2018, William McFarland pled guilty to defrauding investors and vendors of the Fyre Festival, but it is apparent that he did not stop there. McFarland allegedly went on to sell fraudulent tickets to many grand events, totaling almost $100,000. Today’s charges depict our intolerance for such fraudulent activity, and we will continue to diligently investigate acts such as this," FBI Assistant Director-in-Charge William F. Sweeney Jr. said. Among the victims: the 15 people who bought $2,500 Met Gala tickets which NYC VIP Access never had.

The dinner that @fyrefestival promised us was catered by Steven Starr is literally bread, cheese, and salad with dressing. #fyrefestival pic.twitter.com/I8d0UlSNbd

McFarland is accused of using a fake email account that shielded his identity as well as the employee's email to communicate with victims and potential customers. In January, Vice News published a story about Fyre Fest victims getting new offers: "A private dinner with LeBron James and the Cleveland Cavaliers. Front-row tickets to the Victoria’s Secret Fashion Show. A seat at the invitation-only, $30,000-a-plate Met Gala. The offers sound almost too good to be true — and the people on the Fyre Festival email list receiving them should know." 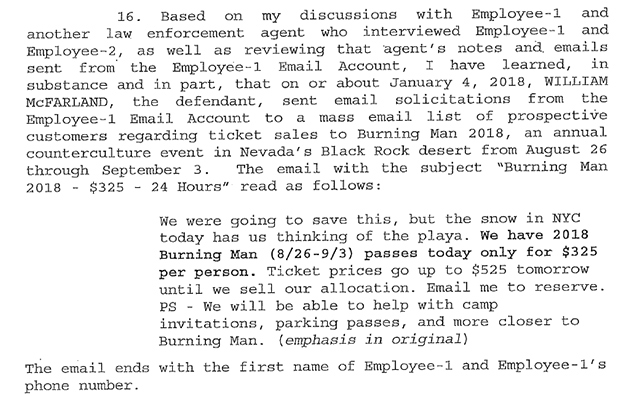 Among the ways the FBI realized that McFarland was allegedly up to his old tricks: they traced the IP address that accessed the employee's email account, as well as Gmail accounts for "Billy McFarland," to an account in Morristown, NJ linked to McFarland's father (McFarland had been living with his parents while out on bail). Also, the payment processor for the NYC VIP Access ticket purchases said that the same "electronic device" also accessed accounts for Fyre Fest and Magnises—McFarland's failed black card product—in McFarland's name.

The payment processor shut down the account because of the negative balances for his accounts:

From the criminal complaint

During yesterday's hearing, the Daily News reports that Assistant U.S. Attorney Kristy Greenberg said McFarland "told friends he had 'cash drops' around New Jersey and knew a pilot. Despite being less than two weeks away from sentencing for the Fyre Festival scheme he’d continued living a lavish lifestyle, spending over a month in high-end hotels and dining at fancy restaurants, she said. McFarland told a friend that if he was sentenced to over three years for the botched concert fest, he’d make a run for it, the prosecutor charged." 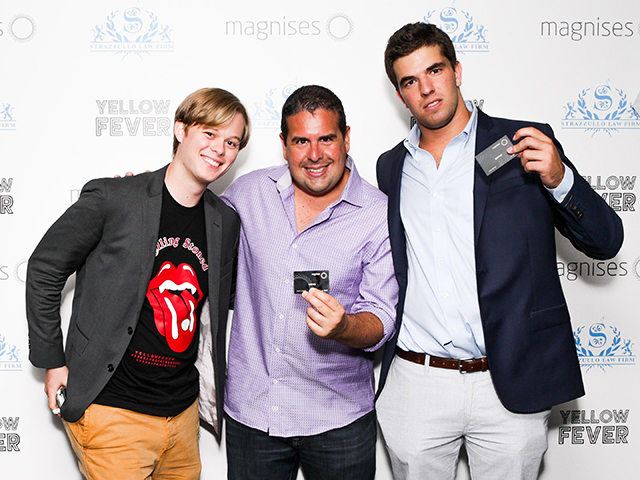 McFarland, far right, at a 2013 event sponsored in part by Magnises (Benjamin Lozovsky/BFA/REX/Shutterstock)

McFarland’s attorney said, "We vigorously contest what is in this complaint." The judge ordered that McFarland be held until his June 26th hearing for the Fyre Festival case. McFarland is at the Brooklyn Metropolitan Detention Center, according to the Bureau of Prisons.

#billy McFarland
#fraud
#fyre fest
#scam
#william mcfarland
Do you know the scoop? Comment below or Send us a Tip