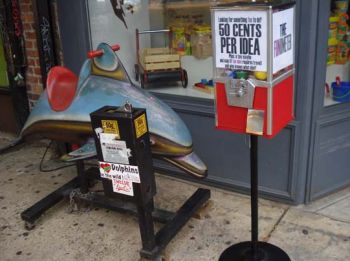 Last week people started spotting an idea vending machine in the East Village. Turns out it's Road Ruler-turned-prankster Jake Bronstein's latest venture: the Fun-o-meter. The 50 cent price tag may seem like a rip-off when you can get a stale gumball or a dolphin ride for the same amount or less, but check out what you get (and get back!):

As if that weren't enough, you even get one quarter back! Bronstein notes that he "only wanted to charge 25 cents anyway, but the machine is configured for 50 cents, so I put a quarter in each egg." For the idea-challenged, this is a quite a steal -- and while it may not be a money-making venture for its creator (around $5 was dropped into the machine in about an hour, but it gave over half that back), the pay-off is still fun.

Got two quarters burning a hole in your pocket? Act now! Bronstein will be bringing it around to different locations all week (check out some tourist spots for your best shot).

#Fun-o-meter
#ideas
#jake bronstein
#vending machine
Do you know the scoop? Comment below or Send us a Tip