Photographer Rowland Scherman, who grew up in Pelham Manor, NY, began his career as the first photographer for the newly formed Peace Corps in 1961. He went on to work for the likes of Life, Time, National Geographic, Playboy, and countless other magazines. He even won a Grammy Award for his iconic photograph cover of "Bob Dylan's Greatest Hits."

But as far as Rowland is concerned, he views himself as "the Forrest Gump of Photography," consistently stumbling into the right place at the right time—and he was there to document some of the most iconic moments of the 1960s and 1970s. For the next few weeks, we'll take a closer look at some of his incredible photos and the stories behind them, including pictures of Bob Dylan, The Beatles, Woodstock, the March on Washington, John Lennon, Bobby Kennedy, and more. To see more of his work, check out his website here—and also make sure to check out the trailer for a documentary being made about him here.

I was working for USIA—US Information Agency, which doesn't exist anymore. I first met Dylan at the Newport Folk Festival. He was just some stumblebum stumbling around—he was nobody. And then he did a workshop one afternoon and Joan Baez sat in with him, and all of a sudden the crowd got about six times bigger than it was ever before. I'm sure it was the biggest audience he'd ever had.

And then Saturday night, he did his own gig on the big stage and he really handled it. He wasn't just playing that mournful, "Lonesome Death Of Hattie Carroll" kind of stuff—he did "Talking World War Three Blues" and inserted a lot of humor into it, and by the end of the weekend he was the big star. Peter, Paul and Mary were doing his backup for christ's sake! He went from nothing to the folk icon he's been ever since in one weekend, and I've got pictures of the whole thing.

The first time I met him, I said "I'd like to do a story about you," and he said "Yeah that'd be cool." I didn't know what the hell I was talking about, I didn't have any clients, I was working for the Peace Corps at the time, I just took the weekend off to go up to Newport to see Mary (of Peter, Paul and Mary) because I was crazy about her. And I bumped into him, and I knew who he was, but he wasn't the super huge star that he's been ever since, it was just the beginning of—it was his coming out party. June '63.

And here's one more of his photos of folk singer Judy Collins from that day: "What it was like listening to the first Dylan/Baez harmonies. Newport. 1963." 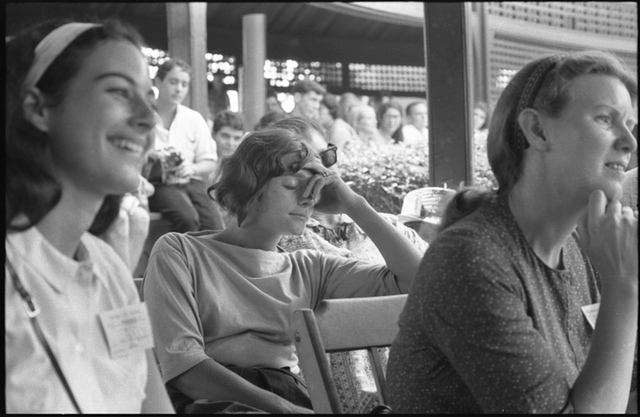 #bob dylan
#Music
#photography
#rock
#rowland scherman
#original
Do you know the scoop? Comment below or Send us a Tip