From Revere To Beer: A Fall 2012 Guide To Three Days in Boston

It's no secret that the next few months are prime-time for escaping New York City to witness the changing colors of New England. Using one vacation day to spend a long weekend in Boston can provide all that seasonal splendor—kaleidoscopic leaves, crisp air, collegiate optimism—plus a host of other unique cultural experiences.

As part of our Fall 2012 Getaway Guide, we share our picks for the best places to sleep, eat, drink, shop, and explore in Beantown, including special tips from American Express Travel Insiders on how to maximize your time in the city—and the money in your wallet. You can do all this and more in three days...and just one day away from your desk. 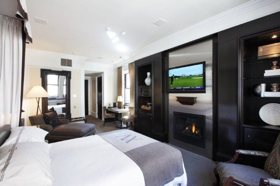 A room at 15 Beacon
The regal and luxurious Fairmont Copley Plaza hotel has been operating in Boston since 1912, and recently underwent major renovations that have completely restored its sparkle. From November 18th through December 30th, American Express is offering a special travel deal with vacation rates starting at $390 with an added $100 food/beverage credit per room.

For Platinum Card members, American Express offers room upgrades upon availability, special check-in and check-out times, and breakfast options through their Fine Hotels & Resorts program, at participating hotels such as Boston Harbor, Fifteen Beacon, Four Seasons, The Liberty, Mandarin Oriental, and the Ritz-Carlton, for a value of up to $450 per stay.

WHERE TO EAT AND DRINK

Barbara Lynch is one of Boston's culinary heavyweights, with three super-popular restaurants in town—No. 9 Park, B&G Oysters, and The Butcher Shop. B&G Oysters and The Butcher Shop are right across the street from each other on the South End, so we recommend hitting both in one shot-start at The Butcher Shop and sample their extensive wine list along with the pâté and terrine platter, then pop over to B&G for fresh oysters and a yellowfin tuna club sandwich or the sweet, tender Maine lobster roll. 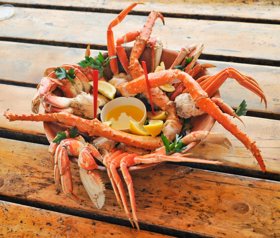 Crab legs at The Barking Crab
Spend your late nights at award-winning cocktail bar, Eastern Standard, and sip one of their more conceptual "heritage" libations or warm-up with a hot buttered rum, mixed with their house-made butter batter.

For more casual fare, try The Barking Crab on the waterfront for just-caught shellfish platters or stop by cult pizza joint Galleria Umberto for a hearty Sicilian-style slice. The Oak Room at the Fairmont Copley has long been a Boston mainstay, and after renovations and a relaunch as the Oak Long Bar + Kitchen over the summer, it's more of a must-visit than ever.

Looking to embark on a marathon brunch during your Boston weekend? Check out Aquitaine on the South End, where the Brioche French Toast with bacon is the perfect sweet-savory mix, and the Mimosas are extra fizzy.

Sam Adams offers brewery tours, where visitors (21 and over, of course), get to sample special malts and smell the Hallertau hops. Harpoon Brewery, the largest craft brewer in New England, has weekday tastings and weekend tours. 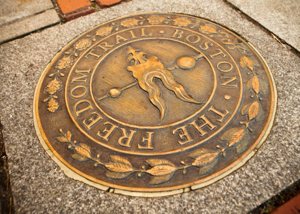 A Freedom Trail marker in Boston
The trick to doing Boston right is making sure that you spend time enjoying both the city's rich history and its modern wonders, many of which are accessible by Boston's affordable subway and bus systems.

To explore our colonial past, American Express Travel Insider Maureen Johnson recommends visiting Lexington and Concord, where the Revolutionary War started. "Be sure to stop at the Minute Man Historical Park and the Lexington Green, where the first shot was fired," she says.

Johnson also suggests checking out the Freedom Trail, which is a 2.5-mile urban walking trail (either marked in brick or by a red line) that allows visitors to find 16 historical sites, including Paul Revere's house. The trail's unique fall options include a midnight tour by lantern light. 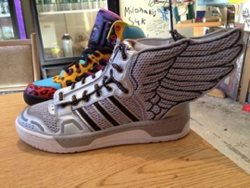 Adidas JS Wings 2.0 at Bodega
Today's Boston also has plenty of entertainment to offer—we recommend catching a show at Orpheum Theatre (where acts like David Byrne and Miike Snow perform) or looking at the masterpieces from Titian, Botticelli and John Singer Sargent at the Isabella Stewart Gardner Museum.

If you'd like to get a little shopping in, try Good Boutique for unique furniture and housewares, cool-kid sneaker boutique Bodega, or the smartly-edited and influential Louis Boston, for men's and women's clothing by lines like Transit and Marni.

You can also wander around Boston's Public Garden, 24 acres of park land next to Boston Common. You can ride in Swan Boats or reminisce about the ducklings.