Remember Friends, that show about sex positive horndogs that gave aspiring New Yorkers completely unrealistic ideas about what their apartments would look like? To celebrate the 25th anniversary of the show this year, an immersive pop-up is coming to SoHo in September—and it'll give you such a nostalgia high, it'll make you briefly forget that the show is leaving Netflix soon, which means you'll have to rely on basic cable reruns for your next Ross/Rachel dopamine kick.

Production company Warner Bros. and Superfly have teamed up to stage the month-long pop-up at 76 Mercer Street (there will also be a separate entrance for a Friends retail store at 503 Broadway as well). According to their FAQ, this is what you can expect: "We'll have set recreations like Joey & Chandler's apartment, Central Perk (obviously), tons of photo opportunities and the chance to learn how to be as type A as Monica when it comes to cleaning, presented by Method."

You can see a layout of the space below. As The Hollywood Reporter described, the pop-up will also offer "Monica and Rachel's purple door; the narrow stairwell through which Ross, Chandler and Rachel struggled to maneuver a sofa despite multiple 'pivots'; and even an area inspired by the fountain from the opening credits." (The real one is actually located in Los Angeles.) 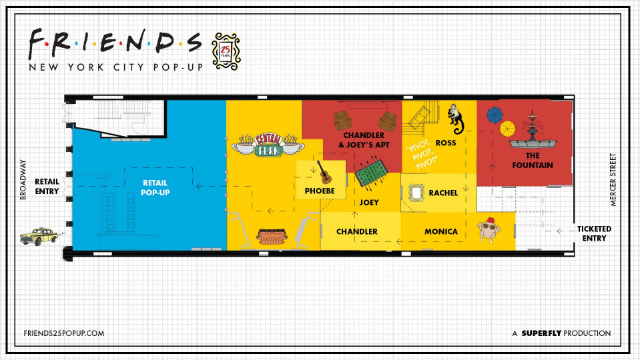 People should note that it "will take about 60 minutes from start to finish" to go through the pop-up, though it's unclear if that includes spending 45 minutes inside the Friends store. The pop-up opens on September 7th and runs through October 6th. It'll be open seven days a week from 10 a.m. to 10 p.m., with tickets going on sale this Friday for $29.50 each. You can get more ticket information here.

Five years ago, there was a Central Perk pop-up to celebrate the 20th anniversary of the show, but there was hardly a fountain in sight.

#friends
#nostalgia is a hell of a drug
#pop-up
#soho
#television
#tv
Do you know the scoop? Comment below or Send us a Tip