Fresco Fiasco In Spain Shouldn't Be As Funny As It Is

Jesus, what happend to your face! An eightysomething artist in Spain has caused something of a fresco fiasco as news has spread of her attempts to restore a plaster portrait of Jesus Christ. And holy moly did she do something. As one BBC Europe correspondent so eloquently puts it: "The once-dignified portrait now resembles a crayon sketch of a very hairy monkey in an ill-fitting tunic."

Apparently Cecilia Gimenez, who is in her 80s, was upset at the way that the portrait, Ecce Homo (Behold the Man) by Elias Garcia Martinez, had been deteriorating in the Sanctuary of Mercy Church near Zaragoza where it had lived for more than a century. So she decided to fix it. Or try to. Gimenez says she had permission ("[The] priest knew it! He did! How could you do something like that without permission? He knew it!") but that isn't necessarily clear.

In any event now art historians and restoration experts are heading to Spain to see what can be done to fix the mess.

The worst part? it turns out that the painter's granddaughter had actually just given a donation to help restore the fresco. But, as we learned in The Life of Brian, always look on the bright side of life! Without Gimenez we wouldn't be able to get photo jokes like this: 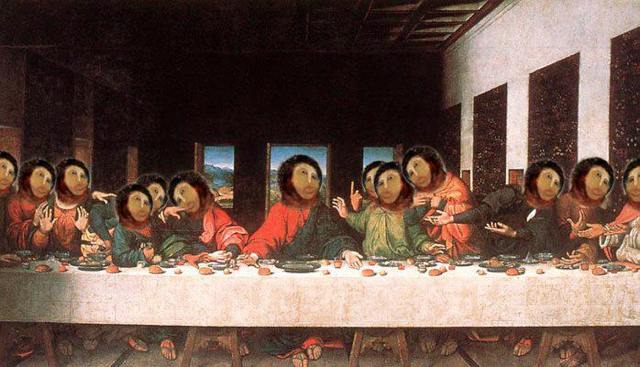 #art
#fresco
#jesus christ
#restore
#spain
Do you know the scoop? Comment below or Send us a Tip