Freebird Readies for Its Encore 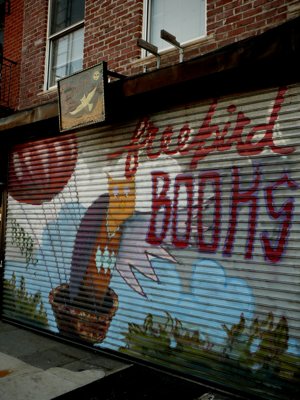 Insert obligatory phoenix metaphor here: Brooklyn’s Freebird, the used book and corn dogs mecca that closed earlier this year, is set to re-emerge a little later this week from The Embers of Gentrification. While the NY Magazine article linked in that last sentence is about the real estate debacle of Red Hook, the shuttered Freebird, which is technically in Cobble Hill, is sometimes considered (with restaurants like Alma) to be an extension of that troubled neighborhood. The waterfront Freebird was itself never a restaurant per se but featured a back counter with random snacks, wine by the glass, and Moxie soda by the tin can. That and a good selection of used paperbacks gave the place a standout charm on a block known for potholes, heavy construction equipment, and perpetual roadwork.

Freebird’s new proprietor is Peter Miller, a longtime book publicist who will revitalize the Columbia Street literary hub. Miller is currently in the process of sorting things out for the reborn Freebird, including a decision about microwavable corn dogs, an old Freebird menu choice he may discontinue. Expect hot coffee to be served at the store in the near future; beer and wine are also likely forthcoming. In the meantime, visit Freebird this Sunday night from 6-8 for a reading and reception featuring Pierre Bayard, author of the fake-book (literally) How to Talk About Books You Haven’t Read. Enjoy some complementary wine and bullshit about how Capri influenced Graham Greene. You’ll at least then be able to take home a decent copy of The Honorary Consul and find out if you were right; after that you can dream about life after corn dogs. Freebird opens for limited hours the following weekend.