Their inaugural exhibition, "Shifting Perspectives: Photographs of Brooklyn's Waterfront," features work from two dozen photographers focused on the borough's shoreline, from Newtown Creek to Jamaica Bay, with a major focus on recreational spaces like Brooklyn Bridge Park and Coney Island. The images were pulled from the historical society's extensive photography collection—much of which you can search online here.

"Our aim is to link visitors to the water's edge through inspired images created by some of the world's great photographers," Deborah Schwartz, president of the Brooklyn Historical Society, said in a statement. "We hope and expect that when people leave the exhibition and walk out to the park, they'll look at their surroundings differently having experienced the tantalizing images in Shifting Perspectives." 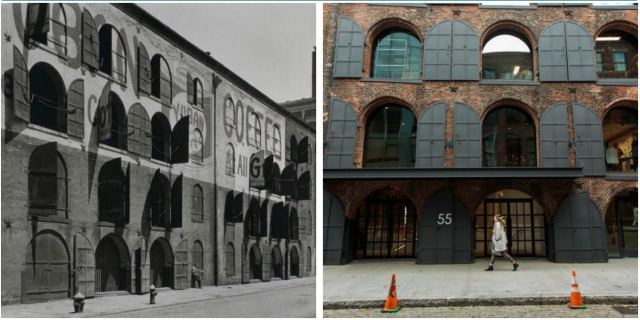 The building's facade in the 1930s compared to today (left: Courtesy of the NYPL; right: Scott Heins)

It certainly helps that the 154-year-old society's second outpost is housed in one of Brooklyn's most striking waterfront locales. A former coffee warehouse, the sprawling Empire Stores building had stood vacate since 1945, but recently underwent two years of drastic renovations. The restored complex kept most of the 19th-century architecture intact, including the schist stone walling, timber frame, and 14 foot ceilings.

In addition to the museum, the space is now home to a massive West Elm storefront, as well as several tech offices and a Shinola. BHS DUMBO is the complex's sole cultural institution.

Shifting Perspectives runs through September and a second, long term exhibition on the theme of Waterfront is expected to go up in December. In the coming months, the DUMBO museum will also host several programs for the public, including one focused on the queer history of the industrial waterfront (June 8th) and another highlighting the shoreline's impact on writers and artists (June 21st.)

Brooklyn Historical Society DUMBO, located at 55 Water Street, is open seven days a week, from noon to 6 p.m. on weekdays and from 10 a.m. to 7 p.m. on weekends. Starting June 30th, the museum will stay open until 9 p.m. for "summer Fridays." Admission is free this weekend; Generally, suggested admission is $10 for adults, $6 for seniors and teachers, and free for students and children.