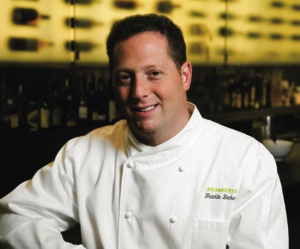 In addition to running the kitchen at NY dining landmark Brasserie, Chef Franklin Becker is also a tireless advocate for two particular causes: Raising awareness for Autism research, and developing recipes and healthy food choices for diabetics. Becker, who turned 38 at the beginning of the month, has been in the business for a staggering 24 years. Many New York Times stars later, he now cooks at Brasserie, and was an awarded a StarChefs Rising Star Award last year. After one recent lunch rush, Becker spoke to us at a side table about the benefits of growing up in Brooklyn, an Arthur Avenue restaurant with no menu, and what it’s like to clean the kitchen at 4 AM with the ghosts of Studio 54 keeping time at the bar.

You’re from Avenue J and Ocean Parkway in Brooklyn. How did growing up in that neighborhood shape your relationship to food?
Midwood is right on the border of lots of other neighborhoods- Bensonhurst, Boro Park- so I had a lot of great ethnic food influences growing up, whether we went to L&B Spumoni Gardens or Di Fara. We went to Adnan’s on Atlantic Avenue and Sahara on Coney Island Avenue. I was exposed to a tremendous breadth of flavor at an early age: I was eating sushi when I was three.

In Midwood?
My parents would take me to the city for that. But there weren’t too many sushi restaurants in the city at that point.

Before you came over here to sit down for this interview, you met someone at the kitchen door here to do a 1-day trail in your kitchen. What advice do you have for young cooks?
Put your head down, and keep your mouth quiet. Do what the chef tells you to do- if you don’t think it’s right, do what the chef tells you to do and discuss it with the chef or sous chef afterward. That’s most of it. My best advice for a young cooks, though, really is to not to let the hype of the media, or the fact that you might be working for a celebrity or well-known chef get to your head. At the end of the day we’re all cooks and it’s about the food, the customer. It’s about making sure that the guest is happy and won over. If you don’t do that, then nothing matters. Too many cooks come out of culinary school and see the success of various chefs in the media and they want to be that instantly. What they fail to realize is that probably 98% of the people they see on TV worked their tail off to get there. There are only a handful of people who haven’t. You have to willing to deal with the reality of what the kitchen brings.

You’ve put together this huge benefit next week for autism research. Can you talk a little bit about that?
The benefit is called Autism Speaks to Wall Street: A Celebrity Chefs Gala. It’s going to be at Capitale, which happens to be a venue I used to run. There’s going to be 63 chefs participating, ranging from Eric Ripert to Wylie Dufrense, to Geoffrey Zakarian. Guenther Seeger is flying in from Atlanta. The chefs who are cooking are a who’s who of the culinary world. Lisa Loeb will be singing and Darrell Hammond is MC-ing. We got the Four Seasons and Italian Wine Merchants to donate rare wine. It’s an incredible event. It’s hopefully going to raise a lot of awareness for autism. My eldest son is autistic, and my goal is basically to make sure that through events like this, we help find a cure. 1 in 150 children have a form of Autism; of the chefs that are participating, 10 out of 63 are affected directly. That’s mind-blowing. In order to change the way the government looks at Autism, it’s going to take a lot of people to really be aware of it and really be a part of it. The money is applied toward research, and hopefully this will make a difference.

You were diagnosed with Type II Diabetes in 1997. How has that changed your approach to cooking?
The diagnosis changed my cooking a lot. My approach to food is generally a lighter approach. Obviously I’m cooking here at the Brasserie, and certainly I’ll use a lot of cream and butter because we’re a French restaurant, but even when I’m cooking something traditional like a butter poached lobster, I’ll try to get fresh ingredients and incorporate fresh green vegetables, try to make it as light as possible.

How often does the menu change?
Usually, about eight times a year. If it was up to me, I’d change it every week, but we do too much volume here to be able to do that.

You’ll do 120 breakfasts, 300 lunches, and up to 400 dinners. During the holidays you’ll be pushing 800-900 covers a day. Does anything ever happen to your mentality as a chef when you’re doing so much volume, and you start to feel like things are starting to get away from you?
You do your best and put your best foot forward. Hopefully you succeed. It’s sometimes definitely a compromise with high volume, and I try to minimize that compromise by thinking ahead, making sure my mise en place is there and my pickups are easy to execute. At the end of the day, the talent of a chef- whoever it is- comes out when you’re under pressure, doing high volume, and how successfully you do so.

You just changed your menu today. Can you describe a new dish on it?
One thing we’re doing is pan roasted sea scallops with barbecued pork belly, with a little Napa cabbage and a little mustard seed, some parsnip puree. It gets a truffle-red wine vinaigrette.

Last month you played a chef’s poker tournament for a charity event and you won. Do you regularly play with other chefs?
I do on occasion, with chefs and friends. At the event last month I played with Harold Dieterle, Sam Mason, Ming Tsai, David Burke. I’ve played with Tom Colicchio a few times. It’s a fun thing to do, and I happen to have a lot of luck in casinos.

What’s your favorite subway line?
I would have to say the 6, because it’s clean and safe. You always feel secure on the 6.

Best inexpensive restaurant in New York?
You know, inexpensive is a relative term. I’m willing to spend a lot of money for food. Definitely Sahara is one of the best bangs for the buck, with outrageous Middle Eastern food. ‘inoteca is an unbelievable value. The Stanton Social is a great value, too. I also think that for the level of food being served, Allen and Delancey is going to be a great bargain.

Do you have a strange, “only in NY” story?
Have you ever been to Dominick’s on Arthur Ave in the Bronx? I love it there, and this story happened around 12 years ago: At Dominick’s, there’s no check, and it’s communal tables. The waiter comes to you and tells you what they have for the night- there’s no menu, either. So I’m there with my wife and some friends having dinner. Some lady sitting next to us just sticks her fork into our artichoke because I guess she wanted to try it. So she does that, and I’m looking at everyone. They’re chuckling, so I stick my fork into her plate of ravioli and take one. All of sudden, it was like she had license to basically take anything she wanted from us, so she actually grabbed our whole plate, put it in front of her and started eating. I was just blown away by the experience.

The host at Dominick’s sits up at the front and he looks over at you while you’re there. If he likes you, he’s going to charge you less money. If he doesn’t, he’s going to charge you more. So he charges us $80 for 4 people, which is dirt cheap, including wine and everything else. The woman who had been sitting next to us, who got just about the same amount of food, got charged $150. It just goes to show you that if you’re rude and you stick your fork into somebody else’s food, you’re going to pay for it.

This restaurant has survived a lot of changes in New York, and used to be open all night. Do you ever have people come in here with stories of the old Brasserie?
It happens all the time. I cannot tell you how many people come in here with stories- people who scored with a lady friend at 4 o’clock in the morning after Studio 54 closed up, things like that. It’s just unbelievable. Everybody used to come in here at 4 o’clock in the morning to drink and order onion soup.

Even before that it had a crazy reputation. I have this book from 1966 that describes the scene then: “The Brasserie… worth attending occasionally to see what slithers down those stairs at dawn… and you’ll view some of the more colorful dregs and minor dignitaries of our times making entrances worthy of an underwater budget epic.”
That’s funny.

A fire closed this place in 1995, before you were here. It’s since been completely renovated. Are there any architectural traces of the old Brasserie here in the restaurant?
Not that I know of. I think everything was completely changed. The ghosts still come out at 4 o’clock in the morning, though.

Have you ever been here at 4 o’clock in the morning?
I have. I power wash my kitchen every month, and do it personally every 6 months.

Just you and the power washer at 4 AM?
It’s just me by myself in the kitchen with a power washer with a couple of stewards taking everything apart, making sure that everything’s clean. Me and the ghost of Steve Rubell.