It's Frank Lloyd Wright's 150th birthday on June 8th, and the city's biggest art institutions are showing their love for the renowned architect with huge retrospectives, all day parties, and Wright-inspired (temporary) tattoos. But while New York may love Wright, Wright certainly didn't love New York—a place he considered a "pig pile," a "fibrous tumor" and "a great monument to the power of money and greed." That disdain may have something to do with why there are only a couple of his works still standing here. But our city's relative lack of Wright is also due to some inexplicable circumstances in which buildings designed by the country's best known architect have essentially disappeared. Below, we examine Wright's existing and demolished New York structures, as well as his plan to transform the East Village that never came to be. 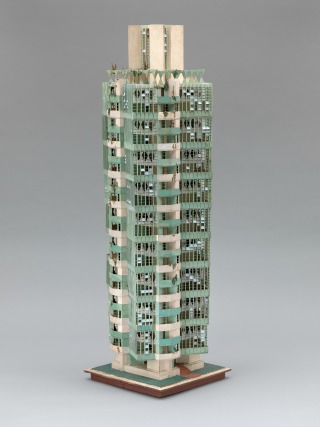 In 1928, nearly three decades before Frank Lloyd Wright's first structure went up in New York City, the modernist architect unveiled a "revolutionary" plan to transform the East Village skyline. His idea involved a triangle of all-glass towers at 11th Street and 2nd Avenue, to be commissioned by the St. Mark's Church. Totally devoid of steel structures, the towers would be reinforced by a concrete "tap-root" core, a first for Wright according to MoMA, which currently holds the drawings. And while Wright considered our skyline a "medieval atrocity," MoMA also notes that the three towers were "positioned apart from other tall buildings to avoid creating the dark urban canyons that Wright detested."

The plans never came to fruition, owing to the Great Depression and cold feet from both lenders and church members. Still, the memory of the East Village towers that could've been lives on in Brooklyn: The architects of a new high rise at the foot of the Williamsburg bridge say their skyscraper takes inspiration from Frank Lloyd Wright, and Bedford + Bowery notes that "much like Wright's aborted East Village skyscraper, The Dime towers over pretty much everything else near its location."

Usonian House and Pavilion (1953-1954)
Frank Lloyd Wright was 86 years old when his first buildings went up in New York City—a model Usonian two-bedroom house and adjacent glass pavilion, intended as both a tribute to Wright's long career and a demonstration of his affordable housing solution. Temporarily erected in 1953 at the soon-to-be site of the Guggenheim Museum, the structures were dismantled the following year after a snowstorm shattered the pavilion's glass roof. For the next three decades, most scholars assumed that the buildings—like so many other Wright originals—had been lost to history.

But an odd thing happened in 1984, when former Wright apprentice David Henken announced that he'd been holding onto the pieces of the two-bedroom model home in his Westchester basement. When the Times reported that Henken planned to reconstruct it, Adolf K. Placzek, the former president of the Society of Architectural Historians, told the paper, ''I am astonished—I had thought it was long since gone." Unfortunately, Henken died unexpectedly the next year, just as he was beginning work on the rebuilding. Today, the Frank Lloyd Wright Building Conservancy owns a few pieces of the home, while collector Tom Monoghan is believed to be holding onto the rest. 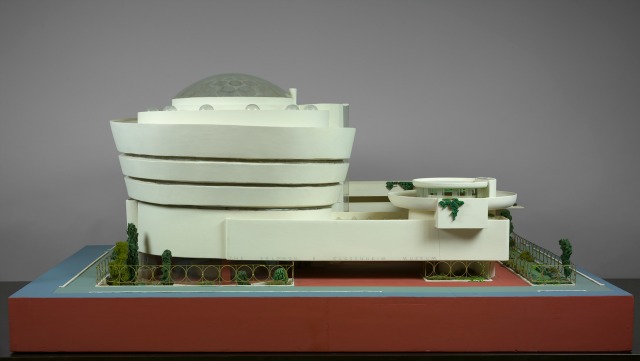 The Guggenheim (1959 - present)
There may be no building in New York so closely connected to its architect as the Guggenheim. The modernist masterpiece—or "Wright's joke on New York," depending on one's perspective—opened in 1959, just a few months after his death, and thirteen years after plans for the project first began. Wright was skeptical of the project from the outset, not because of its ambitious design, but because, again, he just really hated New York. Writing to a friend in 1949, Wright asserted, "I can think of several more desirable places in the world to build his great museum, but we will have to try New York."

Today, the Guggenheim stands alone in the New York museum world, and succinctly describing this "inverted ziggurat"—as the Gugg calls itself—seems almost antithetical to its point. If you're interested in a more comprehensive breakdown of the museum's architecture, head to the Guggenheim on Wednesday for a special birthday celebration featuring rarely seen photos of the museum's construction, a guided tour of the building, and an actual Frank Lloyd Wright reenactor. Did you know it was almost painted Millennial Pink? 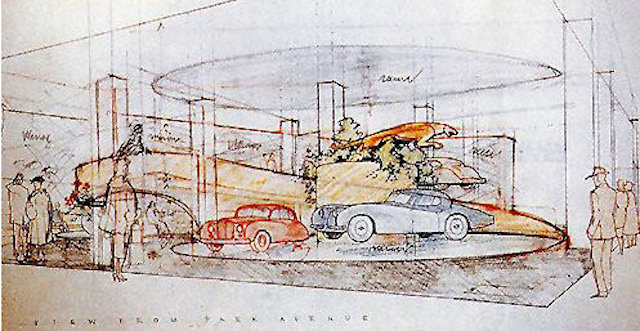 Hoffman Auto Showroom (1955 - 2013)
It's hard to understand how, exactly, a building designed by the country's most famous architect could quietly disappear without anyone really noticing. But that's exactly what happened in 2013, when a luxurious auto showroom on Park Avenue was demolished by its owners, three days after the Landmarks Preservation Commission called the building's owners to say the city was considering landmarking the Wright-designed space.

Commissioned by auto import pioneer Max Hoffman in 1955, the gleaming 3,600 square foot showroom featured curvilinear surfaces, ample mirrors, and a spiraling ramp believed to be inspired by Wright's plans for the Guggenheim. Its recent demolition, according Simeon Bankoff, the executive director of the Historic Districts Council, was nothing less than "a national tragedy." 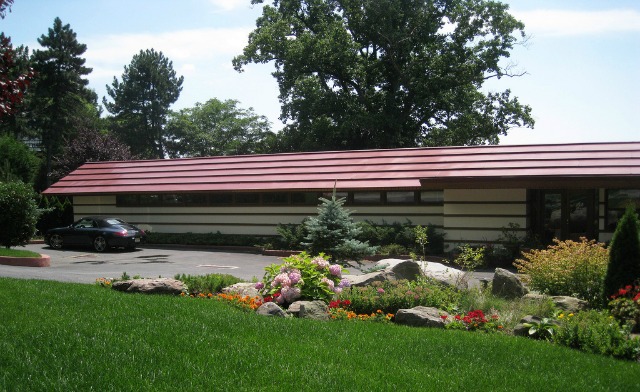 The Crimson Beech (via Wikimedia)

The Crimson Beech (1957 - present)
Credit for our city's only Frank Lloyd Wright residence rightfully belongs to an audacious couple living in Corona, Queens. As the story goes, William and Catherine Cass were watching television at home in 1957 when they came across Mike Wallace interviewing Frank Lloyd Wright about the country's need for affordable housing. On a whim, Catherine decided to write a letter to the then-90-year-old architect to see if he'd be interested in building a moderate-cost home for the couple. Wright wrote back to suggest prefabrication, and just like that, the ready-to-assemble parts were en route from Wisconsin. The L-shape home, to be erected in the couple's new neighborhood of Lighthouse Hill, Staten Island, featured a lead-covered steel roof, creme-colored exterior, and sunken living room. It cost the couple $20,000 for components, and $35,000 for construction—quite the deal from the guy who designed the Guggenheim.

What the Cass family did not fully realize at the time, however, was that a Wright home required a Wright environment, something the aging architect was famously fussy about. "He was a real tyrant,'' Cass told the Times in 1988. "He never took anyone else into consideration. He chose the furniture, the fabric, even the paint colors for us. And whenever he said something would cost $100, you could be sure it would cost $200.''

Indeed, Wright's plan of building affordable prefab homes for $15,000 was based on a major underestimation of construction costs. As a result, only eleven of the structures were ever built. After securing protected status from the Landmarks Preservation Commission in 1990, the Cass family eventually sold the home to it current owners, who've since made slight renovations to the interior. The exterior, meanwhile, remains essentially unchanged, a discreet monument to the architect's enduring influence in a city that he famously disdained.

By
Steve Smith
7 picks a week: Explore the African diaspora onscreen, see new art and get blown away by a fiery quartet

By
Steve Smith
Beyond Broadway: How to see great NYC theater on a budget
By
Lindsey Weber
‘Lightscape’ returns to Brooklyn Botanic Garden for second season
By
Reece T. Williams
Cellist Seth Parker Woods brings Great Migration-inspired program to NYC
By
Tiffany Hanssen
Get the news New Yorkers need in your inbox