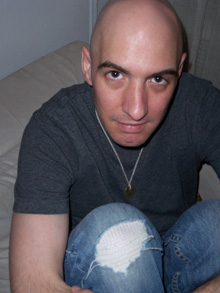 "I've seen bizarre sex acts followed by gentle poetry followed by very perplexed wannabe stand-up comics." Francis "Faceboy" Hall has been hosting Faceboyz Open Mike for just over 13 years, with its 666th weekly performance coming up on July 15th. His stage has been graced by countless comedians, musicians, performing artists, and everyone in between, making it an institution of what it means to aspire to entertain in New York City.

How did the open mic come to be?
The ritual of the talking stick is performed when the person holding the stick is permitted to express themselves while others listen without interrupting and each person has the opportunity to hold the stick. Created by the original Natives of a land that is currently identified as North America, the stick was a ceremonial item often decorated with eagle feathers and crystals to show its significance.

I was asked to host a floundering open mike at 28 Ave B in New York City's Lower East Side (L.E.S.). Formerly known as the Gargoyle Mechanique, it was newly formed as the Collective: Unconscious Theater. I agreed to this for the religious purpose of passing the talking stick, but didn't want to impose my beliefs on others so I simply presented it as an open mike that doesn't allow heckling or talking during ones time on stage. In my mind the mike was and still is the talking stick.

I charged $3.00, which didn't always cover my theater rental costs and if someone was really poor I wouldn't charge them at all. By Feb. '95 the open mike had slowly grown with creative artists of all genres coming and expressing themselves and then one night the theater was destroyed by a fire when a powerful lamp was left on and ignited a cardboard and plastic stage set. No one was seriously injured.

When I brought the open mike to the Surf Reality Theater at 172 Allen street, I had a feeling there would be magic but had no idea that the 8 and half years I shared there would be so incredibly special. There were things done openly that I won't write about because I'd prefer not to get arrested as jail would really suck.

What was the Dance Liberation Front?
In Oct. '98 then Mayor Rudolph Giuliani decided that people in this city were having too much fun so he decided to enforce an obscure cabaret law from 1926 that was originally enacted by racist lawmakers when Harlem nightclubs permitted inter-racial dancing. Suddenly clubs were being padlocked because people were dancing. Robert Prichard as, "Comrade Get Down", Rev. Jen as, "Deputy Disco Fever" and I as the police liaison securing permits formed the Dance Liberation Front (DLF) to protest this, "footloose" nightmare come true. We brought attention to insanity with serious silliness. Sometimes dressed in military fatigues and pink tu-tu's we staged, "Dance Action Protests" including; A conga line up Ave A, A twist-a-thon in Times Square, broke the world record for most people doing the loco-motion and surrounded city hall to do the hokey-pokey. The DLF states, "Dance is not a crime." and it's manifesto states, "Mr. Mayor, we have not yet begun to wiggle!"

How did 9/11 affect the open mic?
Some serious shit went down in America and we in lower Manhattan could felt the smoke and smelled the burning bodies for months. For some reason this made Mayor Guiliani and President Bush extremely popular. Their approval ratings were nearly unprecedented. As President of a country and Mayor of a city that had just lost thousands of its non-military citizens, they were suddenly great American heroes and this gave them a lot of power. President Bush used this power to start a war in Iraq based on weapons of mass destruction that did not exist and Mayor Guiliani used his to continue his attack on fun in New York City. For a neighborhood and arts scene that thrived on debauchery this became a serious battle with winners and losers on both sides. In Surf Reality's case it was a combination of city inspectors suddenly showing up to issue random citations and a greedy landlord who tripled the rent of the theater that had made his property so valuable. Effectively pushing Surf Reality out of 172 Allen Street in April 2003. That space is now a Bikram yoga studio. The building that housed Collective: Unconscious was demolished to make way for a luxury high rise condominium, yet today remains boarded over crumbled remains. Robert Prichard continued to produce Surf shows in other venues and when Mo Pitkin's House of Satisfaction opened up at 34 Ave A, he negotiated with the owners to bring Faceboyz Open Mike Night to their beautiful upstairs theater.

Have you ever been to Bikram Yoga?
My ex-girlfriend Kat Fasano is a certified Bikram yoga instructor who took me to a class in Soho and provided some private instruction. I still love her very much but, no, we do not currently touch each other's urination units.

What do you find most shocking about the open mike night?
That enough people still come. Even though I am now literally one block west from the space where I started, the jobless and the insane that my night mostly caters to are dwindling in the L.E.S.

What's truly most shocking to me is that none of us that have been die-hard regulars creating new and fantastic works week after week, year after year have become mainstream stars. I guess Moby could be thought of as the local kid made good. He had a lot to do with making the L.E.S. hip and I hope that no one is mad at him for that, but we can't lay claim to his success. He did give Rev. Jen and Kat Fitzgerald $1,000 to produce an alternative video of his "New York, New York" collaboration with Debbie Harry and many of us were used in it, but he didn't develop at our open mikes. We've had tons of press and none of us are famous. I think it's The O'Debra Twins who put it best, "No one knows we're famous". Shocking.

Please share your strangest "only in New York" story.
Anything can happen anywhere at any time.

Which New Yorker do you most admire?
Nancy Hall

Given the opportunity, how would you change New York?
Legalize marijuana. Provide a competitive salary for N.Y.P.D. rookies. Legalize dancing. End the global corporate assault on women. Provide affordable housing and sex clubs for the poor. Provide free and effective re-hab for substance abusers and free beer for art stars.

Under what circumstance have you thought about leaving New York?
I was raised just a few blocks from where I now live in a beautiful studio in Greenwich Village. I thank my sister Nancy Hall and her husband Stephen with all my heart for purchasing this place and instead of moving in as planned are renting it to me on an artists budget. I fear they may never get a return on their investment, as I will never leave this place. Unless I become famous and then I'll buy it from them.

What's your idea of a perfect day of recreation in New York?
Having friends over for wine and cheese, petting cats and dogs, sharing music, poetry and marijuana, and touching each other's urination units.

Faceboyz Open Mike is every Sunday Night, starting at 9 PM, at Mo Pitkins, 34 Avenue A.