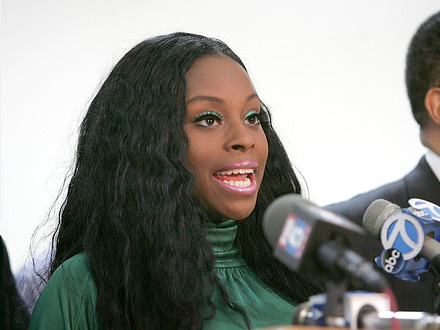 Just last month Foxy Brown declared she was pregnant right as she was facing a jail sentence. Convenient! Today it's being reported that maternity accommodations won't be needed after all, because (not surprisingly) she's not really preggers.

After violating probation in August, Foxy's defense lawyers told the court that she was pregnant. Yesterday her manager Chaz Williams said: "And to the pregnancy rumors, this is the official statement: She is not pregnant." Yes, "rumors" tend to spread when your lawyers announce you are 3 months pregnant to a judge, an entire courtroom, and the media. The rapper will, however, bring a new album into the world while serving time.

The announcement of her first album since 2001 came from a statement released by Foxy herself. It will be called Brooklyn's Don Diva and is set to hit stores on November 20th (a release date before her release date). She also let everyone know, "This is just a temporary situation. I made my bed and have no problem lying in it. My will is steady. What doesn't kill me will only make me stronger."

Will it? Well before her sentencing last Friday she pleaded for a second chance. Apparently two weeks in jail was enough to make her strong (or test her will), as the rapper told the judge: “I’m willing to do whatever I need to do to change. I realize that’s not where I want to be. It’s humbled me in ways I never imagined." When told it was "too little, too late" Team Foxy responded by telling Judge Jackson, "I'm sorry Miss Jackson, we're not impressed, and definitely not stopping musically."

#brooklyn
#celebrities
#court
#crime
#entertainment
#foxy brown
#media
#rumors
Do you know the scoop? Comment below or Send us a Tip