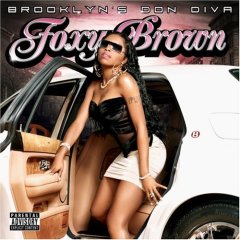 Last we heard, rapper Foxy Brown, who has been on Rikers for about 8 months now, was trying to get an early release because of her "hearing problems". Deaf or not, something worked, and this week she'll be a free woman once again.

After violating probation last year by attacking a couple of manicurists, she was sent to the slammer -- and even spent 40-days in solitary confinement for a confrontation with officers there.

Now she's set for release this coming Friday and is turning it all into some promo for her latest album, which is also being released! (Brooklyn's Don Diva will hit the streets on May 13th.) She has even invited her fans (via her website) to don their foxiest Foxy T's and meet her in the Rikers Visitor's Parking Lot; The NY Post reports that "from there, shooting starts on her VH1 reality series on her readjustment to normal life - whatever that is."

She'll probably be needing a manicure before all of these cameras turn on her, though.

#cd
#crime
#foxy brown
#probation
#publicity
#release
#rikers
#Rikers Island
Do you know the scoop? Comment below or Send us a Tip