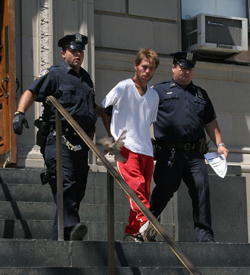 The man who throttled, stomped, kicked, and beat a peacock into a mortal state Thursday morning was turned in to police by his own stepfather yesterday. The Staten Island Advance is all over the story. It reports that John N. Potts was arrested yesterday, after threatening to smash his stepfather's face with a shovel in the older man's home. Potts then ran off and jumped into the Raritan Bay, shovel in hand. The Advance describes that as being the end to an extended weekend of craziness by Potts, whose alleged avian homicide was simply a kick-off.

If Potts was the man who screamed that he was killing a vampire as he viciously abused the majestic peacock in a Tottenville Burger King's parking lot, before running off as police arrived, he followed that act by breaking into a neighbor's home. The neighbor returned to find Potts inside and wielding a knife. Cops arrested him for burglary, but the man was released to continue his bizarre behavior. Cops again ran into Potts and he was issued a summons for posession of marijuana later that day. It wasn't until he pulled the shovel and threatened his stepfather that Potts was arrested and held.

The peacock killer was initally described as being a teenager or a young man in his 20s. Potts is actually 32, but only five foot, six inches and 135 pounds. Potts was positively identified as the peacock killer by a witness who watched him grab and kill the bird as it perched on a car's roof in the Burger King parking lot. The bird was euthanized after Animal Care & Contrl officers deemed its injuries too severe to treat. The man's arraignment has been postponed while he undergoes a psychiatric evaluation at an undisclosed location.

(Photograph from the Staten Island Advance)