Former Limelight Will Not Reopen as a Club 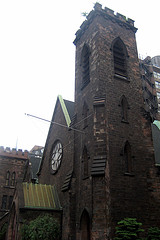 The former clubs housed at the 47 West 20th Street address have been shut down numerous times before fading into the New York nightlife history pages. The most famous, the Limelight, opened in the old church in 1983, and survived throughout the 90s before becoming Avalon in 2003, which shut down earlier this year. But who will haunt the building, which is "notorious for drugs, death, and destruction," next?

The Limelight! But before your little party monster hearts get too excited and race faster than a deafening, monotonous techno beat, it's not going to be a club. "Nightlife legend" Steve Lewis reports on a conversation he had with Joe Dirosa, who told him that his "company has worked out a joint venture with Ashkenazy to exclusively handle renting the space formerly known as Limelight as a place for film, TV, corporate and special events, and what I call branded experiences. I SAY THIS WITH NO UNCERTAINTY THAT THE PLACE WILL NOT BE A NIGHTCLUB." Branded experiences? There's always plenty of opportunities for corporate sponsorship on ecstasy pills.

Still, better than the rumored mall that was going to move in. [via Grub Street]

Photo by WallyG, who also has a lot of information on the church before it turned all clubby.

#avalon
#branded experiences
#club
#limelight
Do you know the scoop? Comment below or Send us a Tip
A new Gothamist is coming! We’ve moved comments over to our beta site. Click here to join the conversation and get a preview of our new website.